I didn't see a thread dedicated to SFF systems so I thought I'd create one. The goal is to share your inspiration, projects past and future, ask questions, and generally create a community for all things SFF. I know we're in the absolute minority, but you never know what bringing a group of enthusiasts and tinkerers together might create!

Disciple
Thank you for creating this thread! Tbh I think we should really have a subforum for TE SFFs.

Also love making (trying to) custom cases, modding and adding new features to cases for absolutely no reason at all. I'm the equivalent of a fancy car collector who doesn't drive all his cars.

Currently looking to get SSUPD Meshilicious. Hopefully in the future, one of the premium NFC cases too for some ultra ITX action. Also looking to get an SG16 despite its not-great internal layout.

Skilled
Anyone with a usff here? I'm a happy camper with my hp elitedesk 705 g4
R

Disciple
Just got done building my first SFF build with a Ryzen 5600G and Asrock B550M-ITX/Ac in Phanteks P200A.

P200A is not as small as some of the well-known SFF cases, but for my usecase, its size is perfect. I also like bottom mounted USB and front switches.
It can fit in a large size GPU if in case i decide to go that way in future. Overall, the building experience was very nice.

Adept
I've been enamored with SFF ever since the mini-itx form factor was introduced. My first scratch build was this, back in 2003: 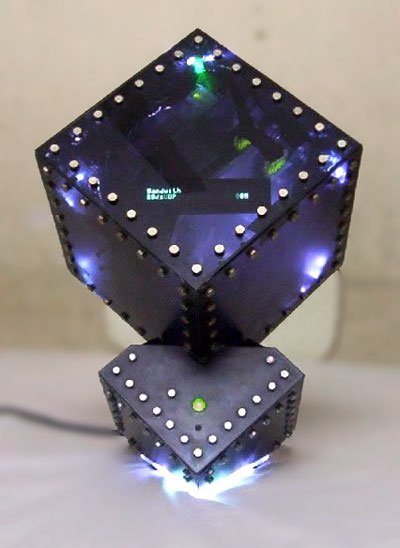 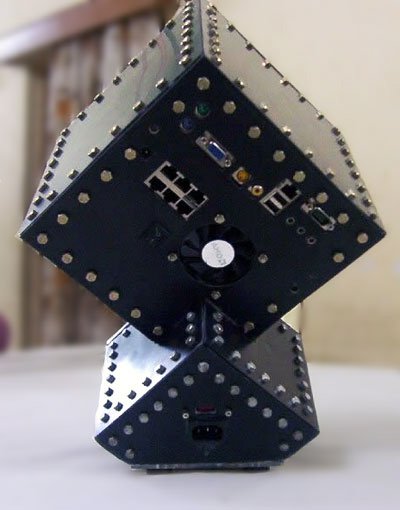 It was a VIA EPIA 800MHz board+processor with a 80GB IDE drive, I later added a 120GB drive. I also integrated a Belkin wifi router, making it the center of my home network. The system was a fileserver for torrented episodes of StarTrek TNG that I would stream to a pocket pc over wifi 802.11b, haha.

The VFD display was a Noritake one from a group buy over at [H] and PhaetonForums, I connected it to the parallel port by soldering directly to the motherboard and physically removing the connector. It was cool back then to insert 3mm led's into molex connectors, so that's how they're lit up. Power supply was a FSP unit, one of the earliest with Active PFC. It's installed in the base, with a 10mm green led serving as the power button and light. The hole underneath it was for the reset switch. Construction was with tinted acrylic from a sign making shop. All of the panels except the front one were sanded for a frosted effect. All holes were hand drilled and it was held together with angled strips of aluminum. The top cube was about 8 inches square, so it was very compact.

Mini-ITX remained a premium underpowered form factor for over a decade so my other systems were either Shuttle XPC's or Flex-ATX. I loved IBM's Netvista S40 so much that I purchased the case twice over the years and paid an unreasonable amount to have it shipped to India only to have it arrive damaged. Some day I hope to recreate the front fascia with resin based 3d printing for a custom enclosure.

About five years later after that build above, I built a 5TB fileserver in my first Lian Li case, the PC-Q07. A drive cage was riveted inside, forcing the Seasonic power supply to the rear. 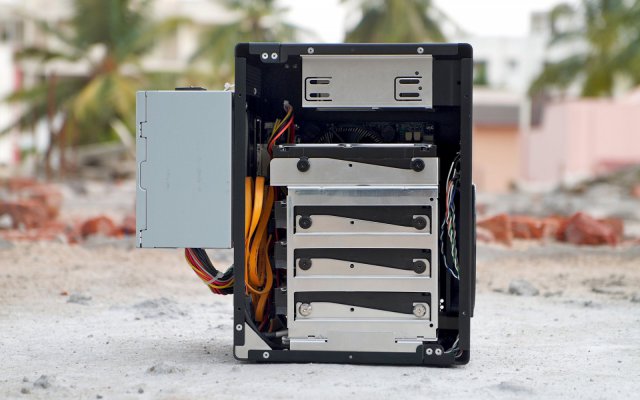 I haven't been very attracted to USFF builds because I like the expandability that comes with PCIe slots and multiple drives. I do have a few branded USFF's, they're quiet machines used by family where a full a desktop would be an eyesore, so they happily live behind the monitor mounted on a vesa plate.

I have a long and maybe unhealthy history of single-purpose sff x86 machines (fileserver, firewall, seedbox, owncloud, htpc) that I've moved to VM's in the last couple of years. I dream of having a hedt mini-itx system as a VM host someday, hopefully. I do have about a half dozen sff projects lined up for the later half of this year so this'll be a fun thread to reference and revisit.
I

Adept
It is not a really good time to undertake SFF builds. After struggling to get a Intel Gen 8 ITX board, I was forced to move to Gen 10. The SFF market in India is pretty bad with regards to availability as well.
All of my builds (except for the NAS) are ITX with the latest using the fancy blue Fractal Design ERA.
I love this SFF build put together 4 years back with an Intel 8th Gen Core i3 and stock cooler till I upgraded to the Noctua NHL9i last year. The case is definitely cramped but still allows for one 2.5 inch 2 TB HDD and a slimline ODD (got a UHD supported Blu-ray R/W drive). Although the Gigabyte H371 Wifi ITX (excellent feature rich board) has provision for 3 NVME SSDs (including the PCIE slot), I am using only one. This also doubles as my "less frequently called upon" HTPC as I can easily carry it and fix it to my TV in the drawing room. Zebronics had actually rebranded and launched the same case albeit with 2 x USB 2.0 slots.

Disciple
Speaking of Zebronics, I recently found out they're selling an NR200 rip off which supports full ATX PSUs and microATX motherboards. It looks pretty neat but the pricing feels a bit steep.

Staff member
Super Mod
@vyral_143 you will like this thread
A

Interesting case, but its pretty much a SAMA ripoff than NR200 - but the PSU cage looks very similar. I can't find any other details nor a manufacturers page as well. Do you know anything more?

Pricing is alright if its build anything like the NR200.
K

At least it doesn't contain explosive glass (AKA tempered glass). Lately PC cases are obsessed with it.

It is in my amazon Wishlist, want to buy it but doubt its build quality.

Recruit
Oh I love SFF builds! I recently did a client custom watercooled build for a client in an NZXT H210i and I absolutely loved the process and the outcome for that build!
It was my first SFF work and was actually very difficult to plan the loop just cuz it was a hardline loop but ultimately I loved the hassle and the brains which went into the process.
Now, I can definitely suggest someone to go for a SFF build, if they love the Form Factor. 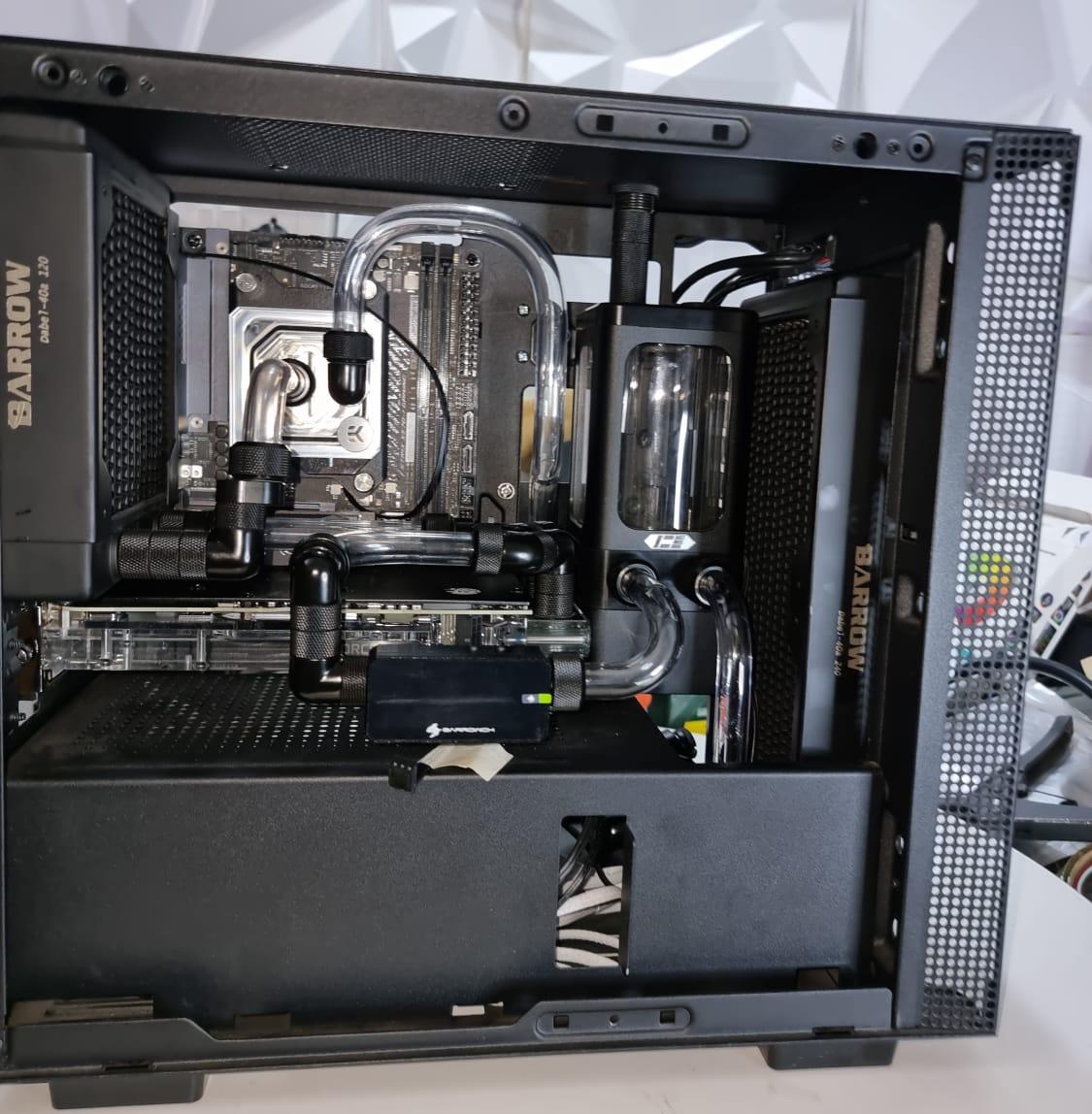 Looks sick. Damn...I'm looking forward for my t1 second batch. Though it will arrive anywhere from May to August.
A

Disciple
I was interested in the case up until I found out that it is 22L but only supports air coolers upto 155 only. That is simply a horrendous tradeoff and also severely limits powerful options. The usable width is lesser than NR200.

Looks great for AIO builds though.

Adept
I've had several NUCs, tiny 1L Elitedesks and a few SFF builds over the past few years.


ibose said:
Zebronics had actually rebranded and launched the same case albeit with 2 x USB 2.0 slots.
Click to expand...

Any idea where can I get one of these? I've been looking for an Inwin Chopin for a long time, even considered importing one.

I am also looking for a 12V (atleast 10Amp) laptop style power adaptor to be able to use it with a Pico PSU. Currently running it with a SMPS designed originally for powering LED strips.
I

ruiner21 said:
Any idea where can I get one of these? I've been looking for an Inwin Chopin for a long time, even considered importing one.
Click to expand...

I doubt Zebronics make these any more but probably worth calling them directly to check. I remember calling them then but they just gave the local stockist who did not have it. I then got the Inwin cabinet from US via a cousin. You can also try importing them via Rahul's service.
I see something similar available but no reviews -

Adept
My primary reason for looking for a chopin is to get that flex psu inside a super compact chasis. I dont mind having an external adaptor, but what I am using atm is ugly and not travel friendly. If I can get a good 12V adaptor to power the pico psu, I can skip the chopin or the clones.

I’ve used Rahuls service in the past to get a Fire HD 10 during prime day. It took about 90 days to get to me. Will get a quote of what it will cost me to get the chopin.

r4hul said:
Looks sick. Damn...I'm looking forward for my t1 second batch. Though it will arrive anywhere from May to August
Click to expand...

r4hul said:
Looks sick. Damn...I'm looking forward for my t1 second batch. Though it will arrive anywhere from May to August.
Click to expand...