Android 4.4 KitKat update rolling out for Wi-Fi Nexus 7 and 10 users

Google has begun the rolling out process for it's first devices to receive the latest 4.4 - Kitkat, Android update which are the three tablets namely the Nexus 7 2012, Nexus 7 2013 and the Nexus 10; after the Nexus 5 was launched with 4.4 on Halloween. The news was confirmed by the Android twitter team. Currently it should be noted that only the Wi-Fi only versions of the devices are receiving the update.

The next devices reported to receive the KitKat update will be the SIM versions of the Tablets and the 2012 Nexus 4.

If you're not an owner of a Nexus device, then an update for your device may still be some way off. Currently only HTC and Motorola (also owned by Google) have officially disclosed that they are working on an update for their devices. Other schedules for leading android phone manufacturers such as Sony, Samsung etc are not yet revealed by their respective companies.

Although the update for the Nexus Wi-fi only tablets have been rolled out, it is rolled in phases - so It may require some time before you receive a notification to upgrade, and it may even take upto a week.

I myself have a Nexus 7, which I will review as soon as it receives Android 4.4 - so stay tuned!

Adept
...so ONLY GOOGLE NEXUS able to get Kitkat 4.4 updates or any other manufacturers handset too able to get this update?

If possible please name those Handset (with model number) .

Adept
Anyone received it in india...
Am holding 2012 N7 and waiting..update here please
Thanks
S

Adept
Im not getting the update for my n7 2013 .. any one else here has the same and has received the update ?

Veteran
4.4 image is available for Nexus 4

Veteran
I installed the factory image since I was frustrated with my nexus 4 losing network every now and then. The radio use to crash and the only option was to restart the phone.
Anyways for everyone to note: There is a hell of a diff between 4.4 on Nexu5 and the one for nexus 4.
So if you are keen about the new transparent bars and all new UI go for the 4.4build which is directly ported from Nexus 5.
Google has so tightly integrated their services with the OS this time that I am feeling like an IOS user
I dont like many of the options but got to live with that since going back to 4.3 would kill my network connectivity.

Veteran
Got 4.2.2 for Nexus 4 OTA. But no details on what it include....
For Nexus 5 they say that the camera app is improved. Hope its same for Nexus 4. 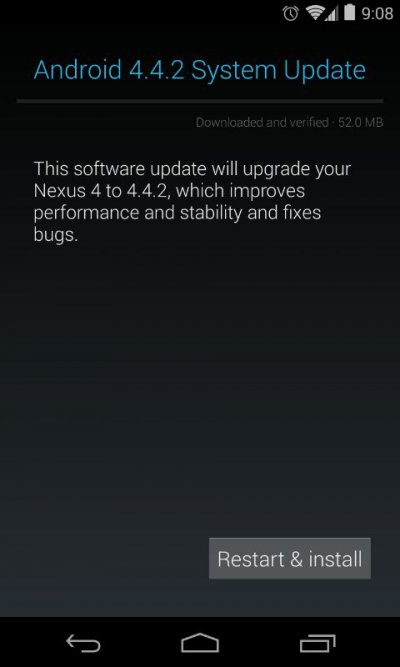 Elite
Got 4.4 updated on Nexus 7 2012 but cannot find any difference except few icons changed. May be also the top status bar and the notification things are all white now and not the hideous blue color which is good and far more pleasant to (my) eyes.
G

Disciple
got 4.4.2 and MX player is not working. It says :android version not supported.

GODMODE09 said:
got 4.4.2 and MX player is not working. It says :android version not supported.
Click to expand...

I think a new version of MX player will roll out.

GODMODE09 said:
got 4.4.2 and MX player is not working. It says :android version not supported.
Click to expand...

Thanks for letting me know and i will make sure not to update to 4.4.2 unless MX player is fixed. I use it daily so i cannot afford that it stops working.
D

Recruit
Every Android users waiting for Kit-Kat, i am also excited about use of Kit-Kat. and let me know if anybody know about another Kit-Kat based device.
S

raksrules said:
Thanks for letting me know and i will make sure not to update to 4.4.2 unless MX player is fixed. I use it daily so i cannot afford that it stops working.
Click to expand...

Advice for buying a tablet- Surface Go or iPad Mini/Air