Skilled
I am looking for an automatic floor sweeper / mop. I have seen these things in ads in the US, but in India, haven't found much online. Not even sure these things are sold here. Does anyone use these things or have an idea where they can be got?

These usually look are lunch dish sized objects, left to run on the floor and which move around on their own to do the cleaning. I am looking for something similar with as little manual effort as possible. I don't know how much they cost so am not sure how much to spend.
M

Adept
I think milagrow is distributing them in india. Saw it at flipkart . Priced 10k upwards. No idea about quality / effectiveness or ASS.
A

Skilled
They are noisy ,slow and not worth the cost there are many companies in india marketing it including eureka forbes.

Skilled
its called Roomba. You should be able to obtain one from amazon.
A

mk151 said:
I think milagrow is distributing them in india. Saw it at flipkart . Priced 10k upwards. No idea about quality / effectiveness or ASS.
Click to expand...


Just checked them out. Way too many reviews for each of those items. I wonder if Flipkart actually sells so many of those.


booo said:
its called Roomba. You should be able to obtain one from amazon.
Click to expand...


Actually in the US there are much cheaper ones too. Is this one like the best amongst those? Reviews are pretty good for this as well as lower priced ones.


adder said:
They are noisy ,slow and not worth the cost there are many companies in india marketing it including eureka forbes.
Click to expand...

Don't really want to take anything at all from Eureka Forbes, my experience with them regarding everything has been horrible. However, have you seen or used any of these since you say they are not worth the cost?

btw, build quality is top notch for wheeme. superbot looks very good too. but I will use it for a day before commenting. 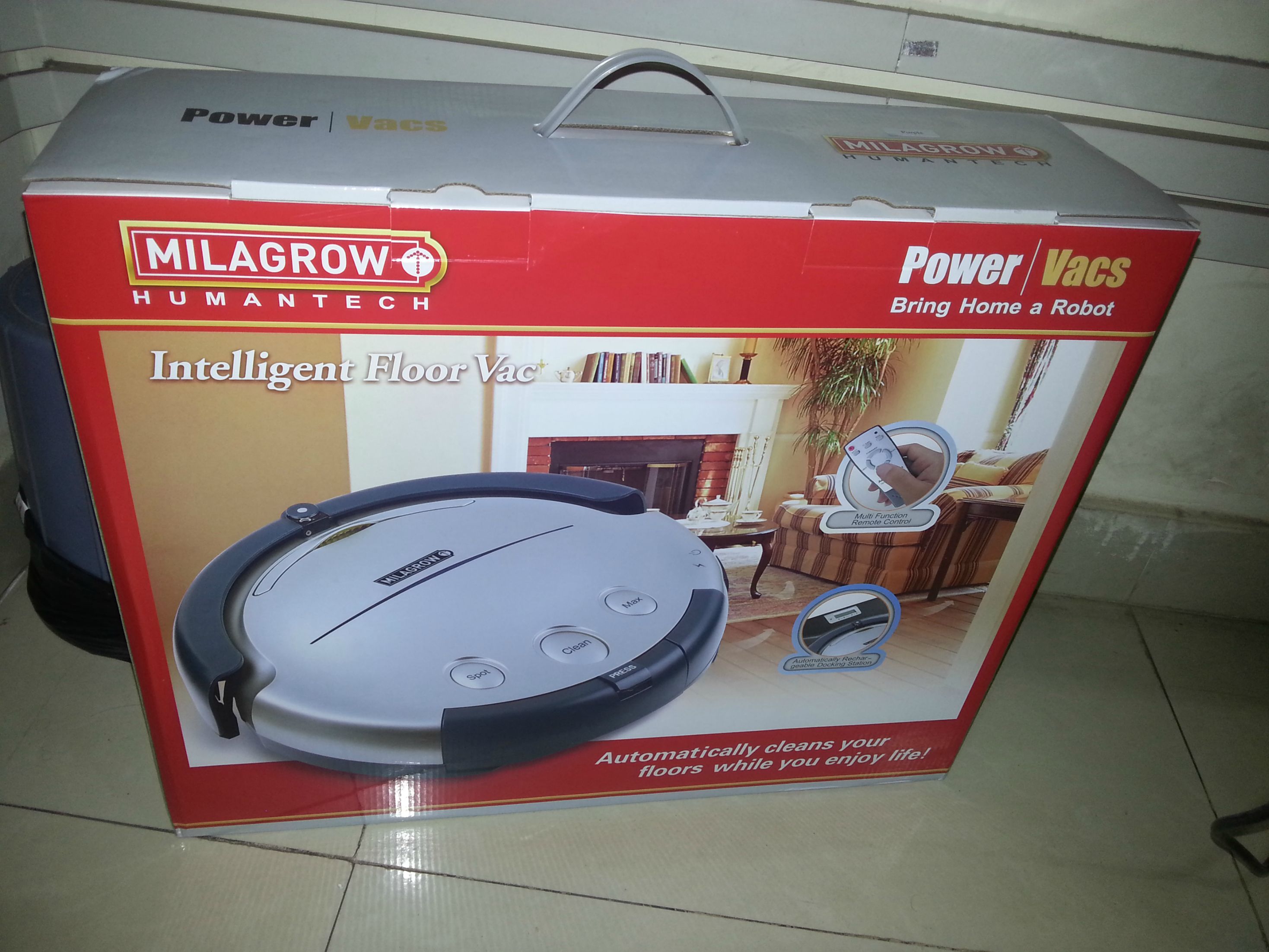 Skilled
@booo, congrats! This looks fantastic Eagerly waiting for your opinion on this thing!
Last edited by a moderator: Jun 9, 2014
M

btw, build quality is top notch for wheeme. superbot looks very good too. but I will use it for a day before commenting.

Eagerly waiting for your opinion and review on the product. Even I am planning to get one..but I am in rajasthan and don't know how effective it will be here...

Skilled
Sorry I was kinda busy last few days, but here is a mini review as promised.
Purchase experience:
Both the robots were purchased from Milagrow's ebay shop through the link provided above. After I made the purchase, The seller took 2 days to ship the product. He chose two different couriers to deliver. i.e., he sent the wheeme through fedex and the superbot through bluedart. both reputed couriers and the packing was done very neatly. in both cases the original box was wrapped in bubble wrap and then put in another box with lot of tape. So both of them arrived in perfect condition in 3 days. Wheeme arrived a day earlier, So I had an extra day to play with it. Everything in the packages was exactly same as the description and the shipping was free. So the conclusion is that he is a 5* seller

Wheeme:
To sound simple the wheeme is a small autonomous robot which strolls on your back/belly without falling off using its sensors. but when you actually use it its a very good experience. First of all, its not an indian product, it has been developed by a company called dreambots; who spent a good amount of time on the research. in international market it sells for $100 and the indian price is 7K which is fair when you add up the customs and shipping etc. The wheeme is showcased in CES2012 and many people are amused by it.

What you basically do is to start it up in some mode and then leave it on your back while lying flat. if you don't lie flat it usually falls off or limits itself to a portion of your back instead of roaming everywhere.

The best feature of wheeme is not in the autonomous roaming but the wheels. I think they have spent a good amount of time designing its wheels and the tickler. when you put it in the vibration mode, it vibrates just like a cell phone with a higher intensity. combine that with the roaming and the wheels that give a feel of gentle pinch/hold on the skin feels really great. its a really great feel when you are tired from office and ride home and want to relax.

Pros:
1. top notch build quality.
2. no brainer operation. just has two buttons, one for power and one for mode selection.
3. some intelligent features like shutting down whenever you put it upside down. coming to upper shoulder when you arch your back so that you can easily pick it up.
Cons:
1. Falls when you are not lying flat and fall off the bed on to the hard surface if you are lying on the edge.
2. if your back is too sensitive, you don't want to use the tickler.
3. 3 Duracell AA batteries for a week. should've been a charged device instead of using AA cells. (personal opinion)

SuperBot:
This is an autonomous vacuum cleaning robot just like iRobot Roomba but a cheaper version which is Indian made which comes with manufacturer warranty. What I purchased is the very basic model in the lineup where the costliest is 19k.

User Interface:
The Robocop has a very simple user interface for normal operation. basically it has 3 buttons; spot, clean and max. The spot cleaning is the operation where you pickup the bot and place it and want that location to be cleaned. it cleans the place in circles and shuts itself off when done. With the Clean button it cleans the room for 30mins and shuts itself down. and when you press the Max button it cleans the room till the battery drains. usually for a 2bhk flat clean button is enough. The charging base has some more functions where you setup the time and then you can schedule the bot to clean the room at a particular time every day and also a "full go" mode to start cleaning the room whenever the charge is full. From my observation unfortunately it doesn't work all the time, thanks to power outages in India. I think whenever the power is out the base is reset and all the schedule is gone. To make the matters worse, there is a scheduled powercut everyday

IMO they should've used a small battery to keep the clock just like on motherboards. wonder how they missed it. I havnt used the remote control yet but its simple with forward backwards buttons and a pause button.

Pros:
1. Cleans the dust and small dust particles autonomously. even at the edges. no brainer interface. just press a button and the cleaning starts. if you setup a schedule and connect the base to a ups near your computer, you don't need to do anything.
2. detects the obstacles and moves gracefully. the floor is also very clean after a cleaning cycle. My flooring is a marble flooring. I think it will work on any surface that is flat enough.
3. cleans below the furniture which is a great positive.
4. Lot of showoff and oomph factor.

5. Automatically finds the charging base and charges itself. The best feature IMO.
6. best thing to buy if you are lazy like me but like clean rooms. yeah, I know

Cons:
1. doesn't like clothes, lays packets, wires on the floor. they usually get tangled in the brushes at the belly. But the nice thing is that it somehow detects that its stuck and stops instead of damaging itself. Sometimes you have to reset it to make it work again. So you have to do some cleaning so that the cleaning bot works. lazy me doesn't like it.
2. It gets stuck under the cot if the height of the cot is just more than the sensor switch to pass but lower than the body. I think this problem is handled in the higher end models.
3. makes annoying beep sounds if it is not attached to the dock. undesirable especially during nights.

Skilled
Thanks for the review @booo. One more question - in desi terms, does this do only jhadu or it does pocha also?
Last edited by a moderator: Jun 9, 2014

Skilled
^The model I bought does only jhadu. the costlier ones like the 19k one does pocha too. with UV sterilization.
E

Disciple
What if there is liquid spill?
M

eXcesscaLIBER said:
What if there is liquid spill?
Click to expand...

Disciple
Thanks booo! for a nice review. I am also lazy like you. !

question : will it move about on all the rooms of the house on its own, or do you have to take it to each room to get it cleaned?