Adept
NEW DELHI: The Union Cabinet on Friday cleared the national medical commission bill, which seeks to reduce red tape in medical education and give the government a say in fixing fees in up to 40% of seats in private medical colleges.

The bill seeks to replace the existing apex medical education regulator, Medical Council of India, (MCI) with a new body in an effort to increase transparency in the wake of corruption cases with regard to admissions to medical colleges.

While private medical colleges will still have the power to determine fees for the majority of seats, that for 40% of the seats will be decided by NMC, offering applicants some reprieve from exorbitant fees. TOIhad first reported on March 28, 2016, that in a health sector review PM Modi had called for the scrapping of MCI. 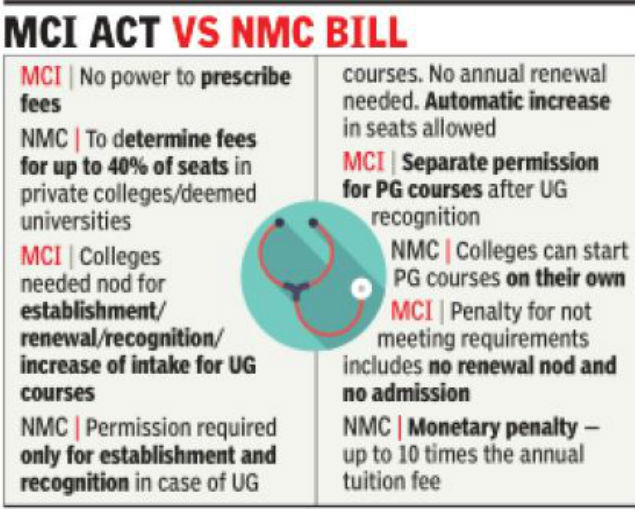 A four-member committee headed by the Niti Aayog vice-chairman drafted the NMC bill The bill proposes a common entrance exam and licentiate exam that all medical graduates will have to clear to practise, officials said. The exit exam will be treated as an entrance exam for PG courses. With NEET for MBBS courses and the exit exam, the multiplicity of exams will end.
The nod for the bill comes in the wake of several complaints against the MCI and its top officials, accused in the past of using its sweeping powers to derecognise medical colleges as well manipulate admissions to mint money. The new commission will have four boards — for undergraduate and PG medical education, medical assessment and rating, and ethics and medical registration.
You must log in or register to reply here.
Share:
Facebook Twitter Reddit Pinterest Tumblr WhatsApp Email Share Link