Veteran
Been a month since release in the US. Available at Lam Rd ?
V

Disciple
not yet mee too waiting for pentium.
A

Disciple
I had been trolling that road for a couple of days, shopkeepers said it would take at least 3-4 months before it hits our shores.

Veteran
Available at it depot....

Adept
thanks for the link .. can anyone find or confirm the availability of Pentium G3220 which is a more VFM cpu.

Veteran
I enquired at Prime on Monday. They said not available. Anyway ...

As much as we'd like to avoid a repeat conclusion of our other Haswell CPU reviews, it's the same old story - the Core i3-4130 is certainly faster than it's Ivy Bridge predecessors, but not enough to warrant an upgrade. However, the same can't be said if you've got a Sandy Bridge Pentium or Core i3 such as the Core i3-2100 - here you'll notice a substantial improvement, but then you'd hope so too given they're two CPU generations apart. It's also true that the Core i3-4130 out-does the AMD A10-6800K in most 2D tests with a huge lead in the image editing test and even pipping it in the video encoding test despite the AMD APU's two core advantage.

As such, the tide has turned somewhat in Intel's favour at the low end, as it increases its 2D performance and makes AMD's FM2 APUs a sensible option only for setups without a discrete GPU. Of course, if you're not into 3D gaming, then the Intel CPU is again our firm favourite - in 2D tasks it outstrips similarly-priced AMD CPUs that we've tested. We'll hopefully be taking a look at a more comparable AMD CPU soon so you might want to hold on a while till we've put it through it's paces. However, the Core i3-4130 provides a lot of bang for your buck, especially if you combine it with a cheap LGA1150 motherboard.
Click to expand...

Adept
anything available - around the 35 watts usage?

Adept
did you mean 35w tdp HW cpu for desktop ?

something lower would be better as well ..
i would be delighted to score an intel NUC - anyone buying??
C

Veteran
Why are you looking for improvements in tdp?

I have an Ivy Bridge 3220 that have never, ever exceeded 20w with one core at full load unfortunately no software i am using on it runs more than one core, and I presume that given two cores the total power consumption will not exceed 40w. And since full load is but momentary, not more than 10% of total processor uptime, i doubt your average consumption going from Ivy to ULV will drop by more than about five watts.

That difference, when given one thousand hours, will have saved about five units. At the highest urban rate that is about fifty rupees, give or take.

I don't see the noise about power consumption relevant with desktop parts. In the end the savings are simply not substantial and are easily masked by differences in say, PSU efficiency. When it comes to NUC, it's still quite expensive for what you get. About 20k plus a disk and memory, you could easily build something much cheaper. Atom unfortunately regressed in its second generation, and hopefully it will die soon.

If you are looking at the lowest possible power use for desktop tasks, get an ultrabook if you can live with the form factor, or a tablet. Battery use means zero consumption, and charging is more efficient than sucking down power with a screen and a bunch of fans and disks.

i need it primarily for headless use ( no screen etc ) 24/7, for downloading.. with video usage of roughly 3 hours a day... i prefer compact form factors - i carry my zotac along with my office laptop in my laptop back - that convenience is unparalleled.

in short, give me an i3/i5 in a ultra sleek form factor of 7" X 7" X 2" max cabinet and I am happy with a TDP of 40W as well.. anyways after configuring power states properly, i agree max TDP will be rarely used.

Adept
all of the desktop cpu has minimum 55W TDP AFAIK .. there's a Celeron 1820T with 35w tdp but it's not released yet and intel is going to release the normal 1820 version with 55W TDP.

Adept
The T variants of Ivy or Haswell Celerons & Pentiums are only for OEM customers and not for retail sale. And i dont fully agree with @cranky - the low wattage machines can be cost effective if paired with a non-desktop PSU e.g. laptop power brick PSU or Pico PSU.

Staff member
TDP ratings for the Pentium chips have been more of a marketing gimmick. Check the delta between a 65W G620 and a 35W G620T Pentium : 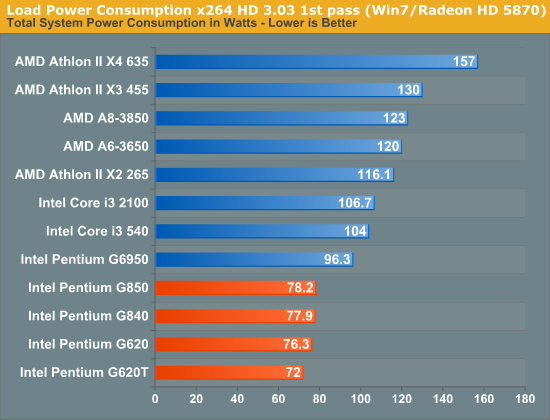 Adept
Thats because of the inherent inefficiencies at such low loads by the regular PSUs - no matter "bronze" or "gold" certified - you need a Pico PSU or external power brick to see a bigger difference...Core Temp will show you realtime power consumption (relatable to TDP rating) as well - my Celeron 1007U idles around 3W and full load around 8-9W....
You must log in or register to reply here.
Share:
Facebook Twitter Reddit Pinterest Tumblr WhatsApp Email Share Link