I'm facing no signal at all for my Tata Sky HD+ set top box - Checked All Cable & Connector / Did Master Reset / Clean & Vacuum the All Vent / Reinsert Smart Card / Checked Antenna Module all are in place / Weather is Fantastic outside - Bright Sunlight with clear blue sky.

I know I have to call TS Support - But Is there any way I can keep the existing set top box - mainly the HDD which got some valuable recording.

Can anyone post estimate what kind charge I'm expecting - if they replace the STB ? Is it the 7400/- I need to pay. Do I get any new STB or they provide some old STB from other customer. 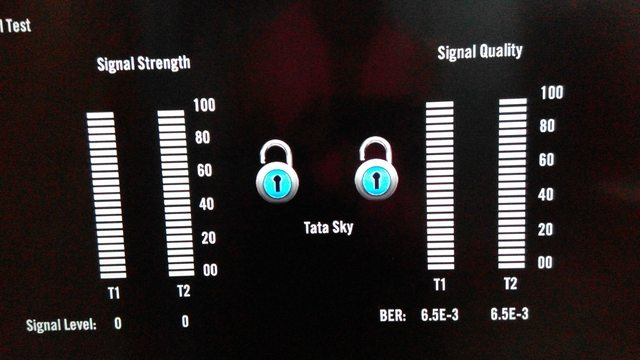 Adept
Yes its having some problem since yesterday.

Tried contacting customer care since morning but I guess a lot of customers are facing same problem and all lines got busy. Even tried contacting through chat but no vain even after waiting in que of 100 members.

The IVR instruction reads send "NS" to 56633 (from registered mobile number) and they will get back to you to resolve your problem. (Same is posted on their website also, do check)...

Hope they resolve the problem soon...

Staff member
Yup not working since last night. They said they will resolve it today.

Adept
yup. They are upgrading their systems/servers or who knows maybe satellites.
Anyways, I couldn't get any reception from last night at 19:00 hrs. Woke up and checked at 9 or 10:00 today and it was working again but not all channels. Wonder what they are upgrading that is taking so long.
I think that the recent hike in their services was also done to facilitate this upgrade.

Adept
Is this upgrade meaning there is more space allotment for HD channels ?

Adept
Don't know man but they have hiked the price twice in last few months. M thinking of moving to Videocon now

Disciple
I apologize for OT, for HD channels also do you guys get ads on the program screen, I mean overlaying on top of current program. Its getting so annoying to watch TV these days with so many ads on top of the program, disturbing the whole mood, robbing me of any pleasure.

Now I am so fed with them, I completely stopped watching TV altogether. Now dont get me started how I feel to watch cricket on start sports 1.

I am burning all my bandwidth(ACT hyderabad ) for watching live stream than live TV.

Veteran
Yep, on-screen ads during the shows are there on pretty much all channels these days. Really annoying especially if the program is trying to display a message/caption/information about the show and on top of that the ad shows up and you miss that info...
H

1. Intermittent info screen popped up saying - Earth, satellite and the Sun are in a line causing solar disturbance of some kind. Couldn't read fully... 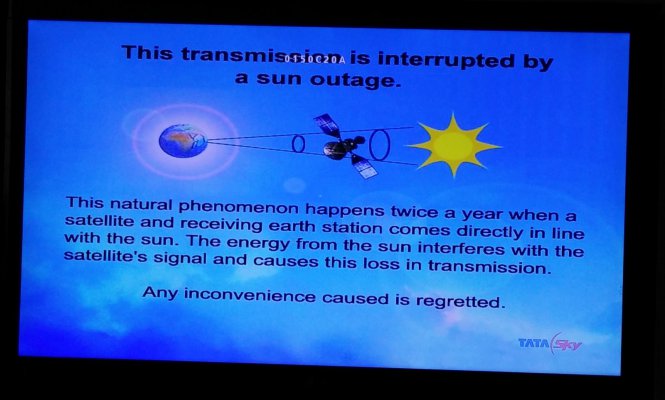 I too got this message but it was only for a couple of minutes during the India match on Tuesday.
This issue is different from what many people are facing currently. Its ridiculous how a DTH service can be down for more than 36 hours and TATA did not have the basic courtesy to inform the customers about the ETA or downtime in advance.
I bought my Tata HD STB in Jan this year so maybe its already on latest firmware. I have had no such downtimes recently. If I do face a downtime this weekend which is a TV wknd coz of the India match and Aus GP.... I swear I am not going to forgive them....

Adept
^^^ Yes...This is the first time I'm facing Longest downtime since 2011 - Now the question what is it ? They are upgrading their system or sun outage....

Most regional SD channels are out of signal - but HD channels (Subscribed) are back online.

Veteran
Didn't face any signal issues or downtime here in Pune, there was some picture breakage for few minutes on Wednesday but after that the channels (SD and HD) seem to be showing fine. I have 2 HD+ STBs.

dissel said:
^^^ Yes...This is the first time I'm facing Longest downtime since 2011 - Now the question what is it ? They are upgrading their system or sun outage....
Maybe they screwed up so bad they are now stating 'Sun Outage'
Most regional SD channels are out of signal - but HD channels (Subscribed) are back online.
Click to expand...

The Sun outage is a natural phenomenon and lasts for few minutes. In my case it was less than 10min. Its said to happen twice a year.

The recent issues are due to some STB upgrades gone awry. No proper testing was done and it seems that the updates were not compatible with all STB. TATA is not officially informing anything but this is what I got to know from people in Tata office here in Pune.

I dont know so just asking... Shouldn't that affect all STB in a particular area? Or do different STB input signals from diff satellites?

MUMBAI: Several customers of direct-to-home (DTH) operator Tata Sky were in for a surprise as their television screens went blank due to signal outage. The mishap happened due to a change in parameters on the satellite.

It was a busy day for the DTH operator with thousands of calls and messages pouring in from angry customers who wanted immediate resumption of services to catch their daily dose of favourite programmes and, of course, the cricket World Cup. The technical glitch originated on Wednesday.

Tata Sky MD and CEO Harit Nagpal said that a few thousand out of more than 10 million subscribers were impacted. The DTH operator had received 20,000 complaints of which 13–14,000 were dealt with by its technical team.

“We did a testing this morning. For capacity enhancement, we did parameter changes on the satellite due to which 15,000–20,000 customers got impacted. We have already looked into 13–14,000 of those complaints,” Nagpal said.

He further stated that the parameters have been reversed back to their original position. “We don’t know which dishes are misaligned. Every time we change parameters on the satellite, some dishes that are not aligned start getting disrupted signals. We did some testing for a few hours this morning. We have reversed them back to original parameters,” he explained.

Nagpal clarified that these are regular tests to enhance capacity. “We are adding channels constantly. Every three months we add new channels. Last year we added 70 channels. As the compression gets better, we can add more channels,” he averred.

Adept
Guys, someone from Tata Sky came to my house today and did something with the cable that is inserted in the dish. I was inside having breakfast so I don't know for sure but my mom is saying that he got the cable out and did something and inserted it again and now all the channels are working.

Veteran
didn't find any signal-outage at my place (Mumbai). may be there could've been for a short time, but no one at my home is aware of it. watch TV mostly during the night.

scott1391990 said:
Guys, someone from Tata Sky came to my house today and did something with the cable that is inserted in the dish. I was inside having breakfast so I don't know for sure but my mom is saying that he got the cable out and did something and inserted it again and now all the channels are working.
Click to expand...