Today i will be unboxing the brand spanking new monster GPU from ASUS Republic Of Gamers (ROG), the ROG GTX 980 Matrix Platinum. With its younger sibling (Strix GTX 980) already holding many overclocking world records , this card has big shoes to fill. From the looks of it , the card is properly kitted out to smash world records. The amount of innovation Asus integrates into these flagship GPU’s is nothing but remarkable.


The next few weeks should will be pretty exciting as overclockers around the world unleash this beast in the quest for world records and domination.


Built using Nvidia’s 2nd-gen Maxwell architecture with customized and enhanced ASUS components and the new DirectCU II cooler with 10mm heat pipes , this video card is a ROG GeForce to be reckoned with.


The reason why I choose the ROG cards for my overclocking and also my personal rigs , will be clear the moment you pick one of these beauties up. As soon as you take out the card out of the box you cant help but get smaked in the face by the sheer beauty and quality of the thing. This beast isn’t just filled with quality components, the whole package just feels super premium.


The ROG Matrix Platinum special features include a DirectCU II cooler with a CoolTech axial fan, stunning matt-black heatpipes and a real-time load reactive ROG LED that is visible through your case window. Asus also gives us a Safe Mode button that resets everything is things go too far, giving us the freedom to really push the gpu without much worry. We also get the Asus exclusive memory defroster, which is a resistive trace running around the ram that will heat the PCB area around the ram when under extreme cold. The Molex 4-pin power connecter is given for just that reason.


At the back of the GPU is a stunning brushed-metal ASUS back-plate that says Asus Matrix, and it’s a good thing its there. It helps a lot with heat dissipation , Protects the card , adds rigidity so that the pcb does not flex under the weight of that monster cooler and last but not least.. Looks stunning!


This card comes factory-overclocked out of the box to some pretty insane levels!! This thing is designed to destroy benchmarks and games. It is clocked at 1,241MHz with a boost clock of 1342Mhz.. yes you read that right.. 1342Mhz.. On a freaking GPU !! Now combine this with 4GB of GDDR5 Ram operating at 7Ghz (effective and massively overclockable) on the 256bit memory bus and you have a recipe for total annihilation.


The 2048-core GPU is fed by the state of the art DIGI+ VRM with a 14-phase super alloy power design, high-quality super-alloy 10K Black Metallic capacitors that are designed to work even at sub-zero temperatures !! Not to forget the upgraded super alloy chokes. (*Hint Hint*)


ASUS has not overclocked the Matrix 980 to ridiculous levels out of the box, A lot of thought has been giving into making this a very balanced design, focusing on reducing noise and heat, while also at the same time improving power efficiency, Now don’t go thinking that this is another good looking card that won’t butcher your games.. if you choose to overclock some more , and I mean a WHOLE lot more(let’s face it.. who won’t if he has this beast ), there is still plenty of headroom.. More than enough to please even the most extreme overclocker. More on the overclocking in my review.. Got to leave something for later


Ok enough talk.. time to pop the box open and see what's screaming inside the box


The Box in all its glory.. This thing is massive.. almost the size of the a motherboard box. Truly high quality packaging. 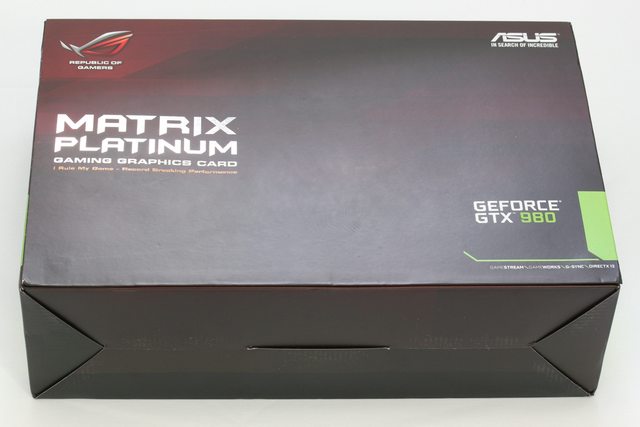 Some of the special features of the Asus ROG GTX 980 Matrix Platinum. 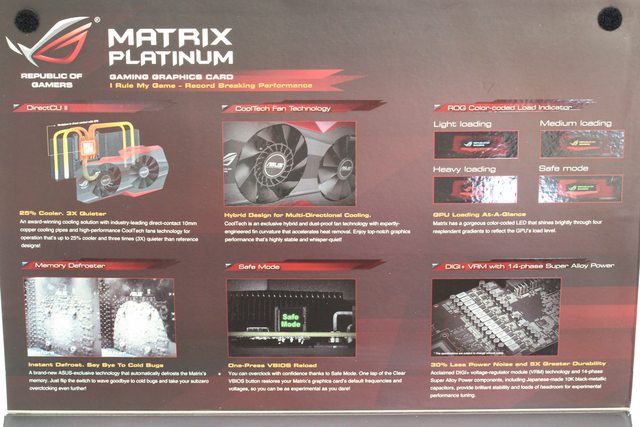 The back side clearly lists all the specifications and even more in-depth details about the amazing features built in by Asus. 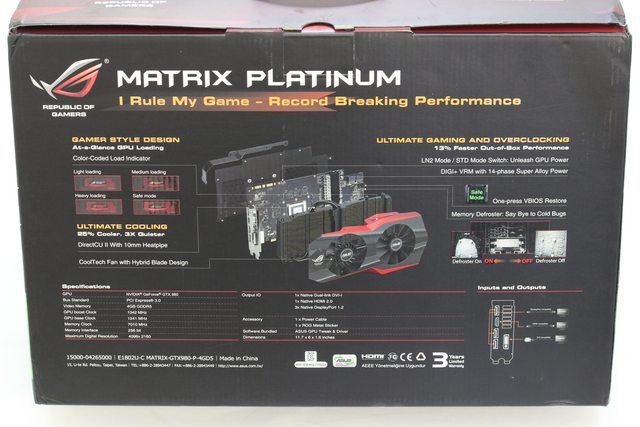 Once you pop the flap open .. you are greeted with this… That is one smexy looking card folks !! 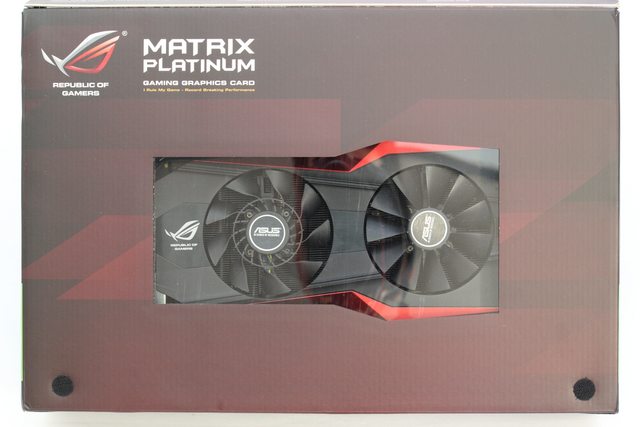 Again.. excellent packaging.. the card has absolutely no chance of getting damaged during transport. 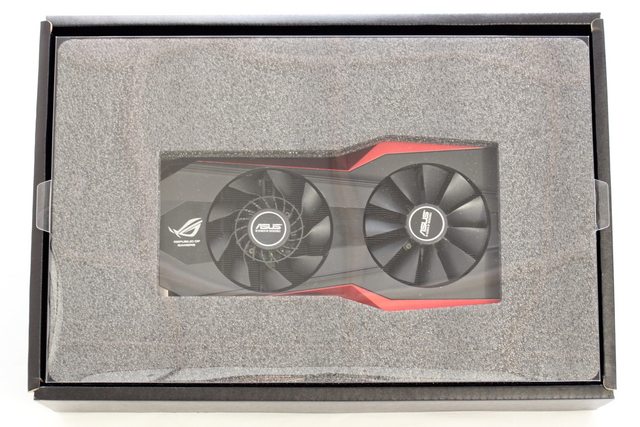 Here we have the card in all its glory.. ready to be unleashed  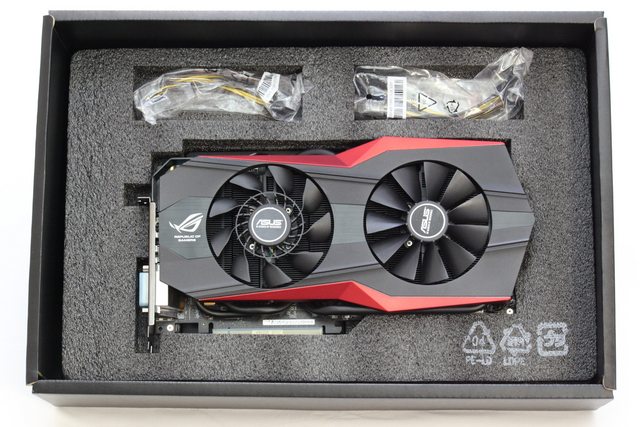 Notice the perfect and thick foam cutouts.. this card is super well protected !! 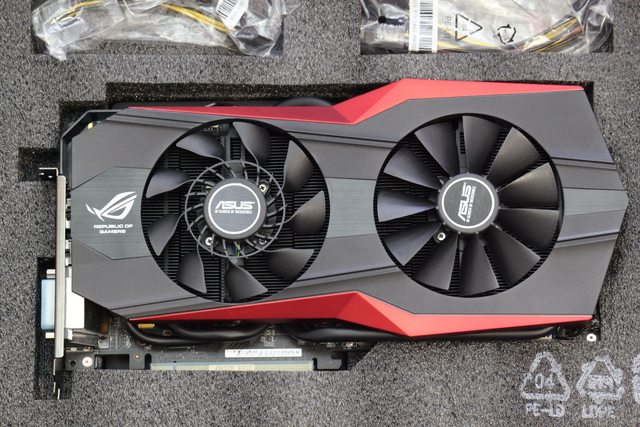 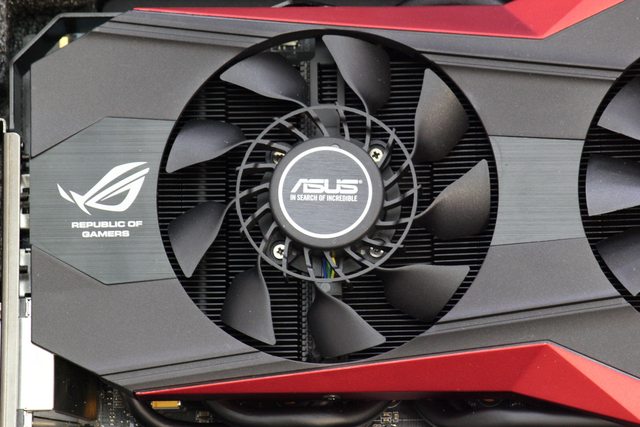 You get the Manual and driver CD and 2x Dual 6 Pin to single 8 pin converters in the box. Also included is one sexy ROG badge in metal. This alone is worth getting the card for.. 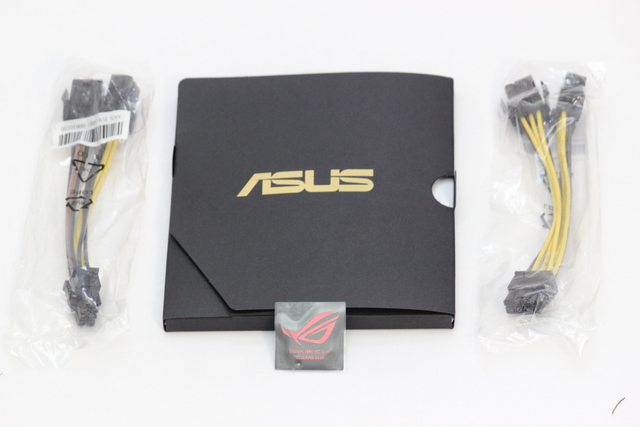 The card…. Is it sexy or what?? and look at them black fat heatpipes.. properly awesome this is. 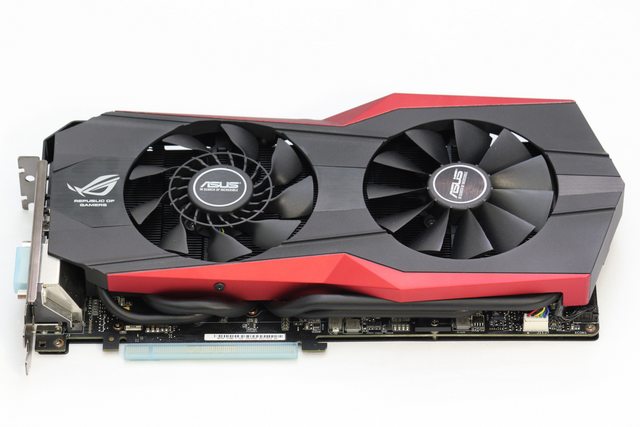 The beautiful backplate with Asus Matrix laser etched on it... everyone should now you have a ROG Matrix Platinum GPU in your machine !! 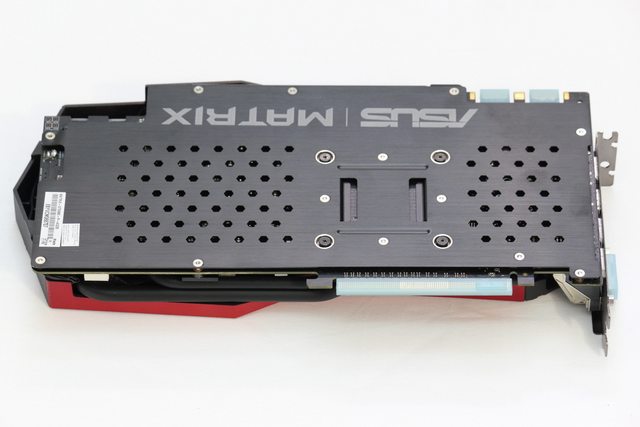 Here we can see the Dual SLI connectors and the Dual 8-pin PCI-E power connectors. This thing is built from the ground up to clock like a monster. 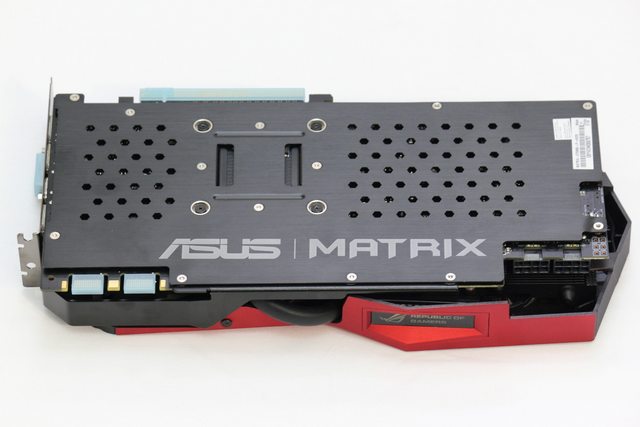 Notice the Safe mode switch. This is a god send when pushing the card under LN2. Just another amazigng little Asus innovation. You can also see the Molex 4-pin power plug for the Memory Defroster. Again, not something that is found on any other GPU .. This is proper innovation right here !! 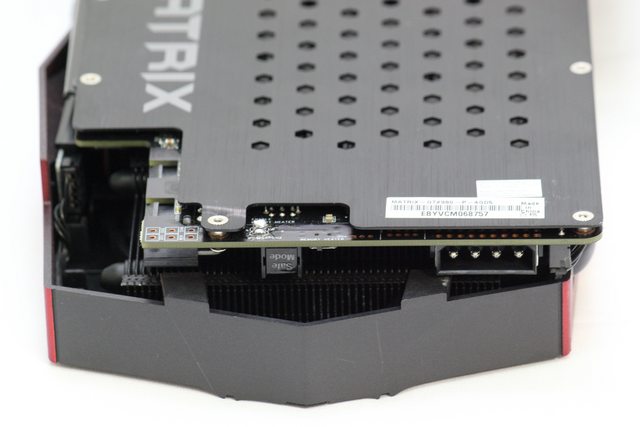 To activate the Memory defroster and also the LN2 mode.. just solder these two connectors. Then flip the switch on the card and done. No real need for Volt mods on this puppy. 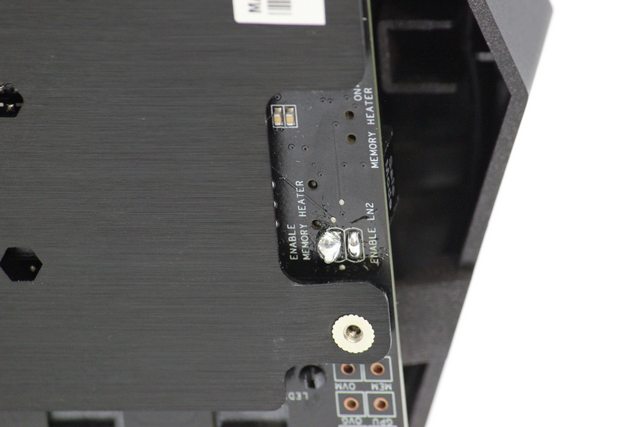 Measuring points given for use with a Multi meter. 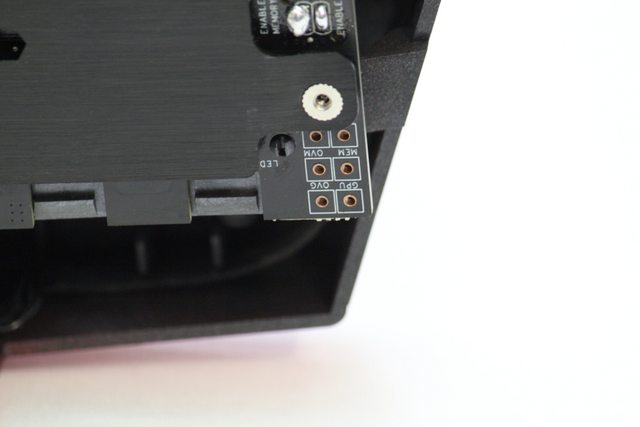 Another shot of the Safe mode switch and Molex power plug. Notice that little switch next to the safe mode button ? Well that Is the switch to enable and disable the Memory Defroster once you have soldered the required connectors as shown earlier. 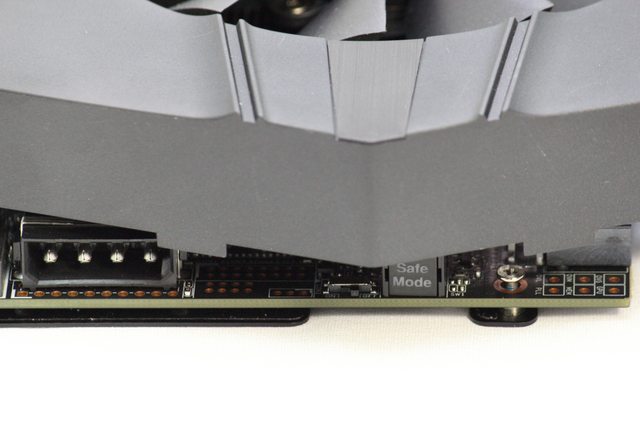 Here is a shot of the 2x sli connectors for up to 4 way action. That is not the reason for the picture though.. Notice the small switch to the left of the sli connector ? That is the Bios switch for changing from standard mode to LN2 mode. Superb to have Dual Bios capability on this card. 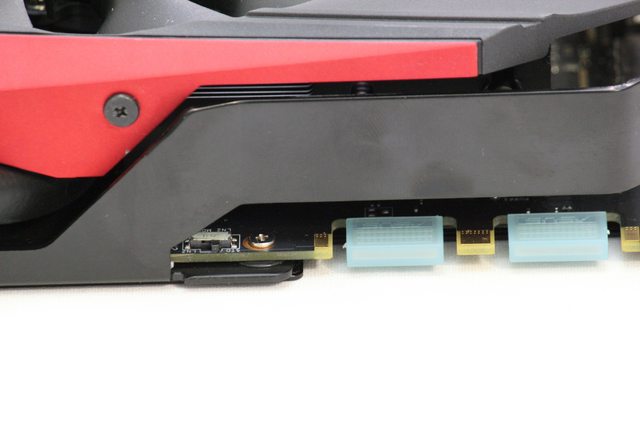 This is what it’s all about.. That Republic Of Gamers logo. You know you have the best if you have this logo  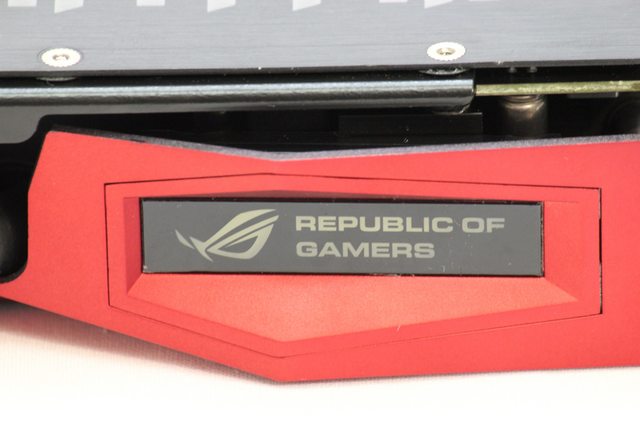 Another beauty shot of that Cool Tech fan.. Soo pretty !! 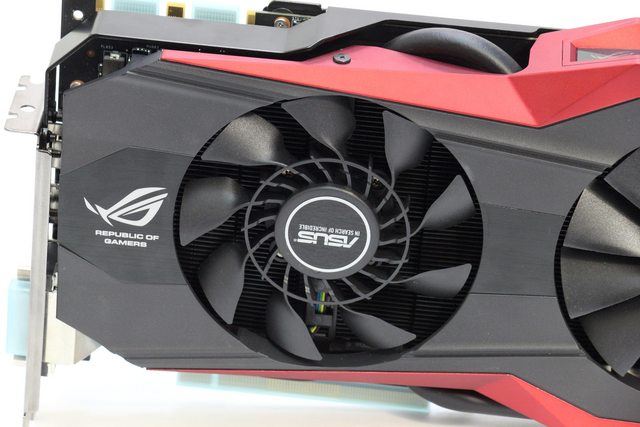 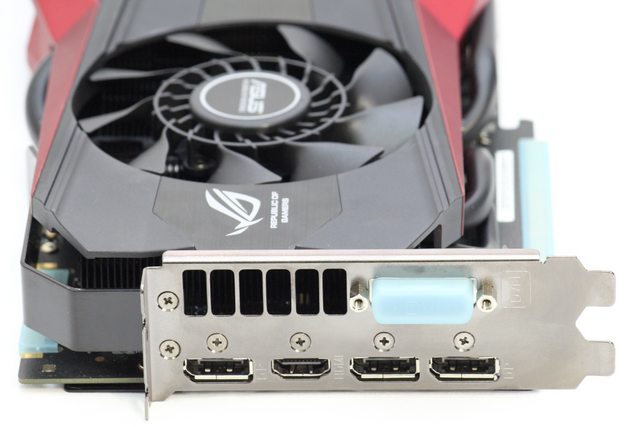 I will leave you with the specs of this card..


Thanks for looking guys

Adept
This Card looks like a beast. Looking forward for some LN2 OC and some new benchmark records