User Review A Cooler Master Elite 361 Cabinet for my HTPC

I'd bought myself a pair of speakers and an AVR earlier this year, and had hooked it up to a spare computer that I'd put together with all the parts left over after various upgrades.


The HTPC
I'd upgraded my CPU last year from an AM2 to an AM3+. So I had an AMD X2 3600+ lying unused.
I had an unused Asus M2N-e DDR2 (with 2.5GB RAM) motherboard that I had left-over after upgrading to a DDR3 board a few months back (with 8GB RAM).
I had an old 450W VIP SMPS that was highly recommended a long time back.
I had a 7-10 year old 80GB IDE HDD lying unused in a still working P4 computer.
There was a 1 TB HDD with bad sectors that I'd removed from a WD external drive.
And off-course, I had plenty of mice and keyboards lying around.

I could have bought a Raspberry PI, or something similar, but I didn't want to spend 4-5K for the device, and then buy a bunch of external casings for the HDD's to connect them via USB. And more importantly, I didn't want to waste what I had.

So, I bought a wi-fi card for about Rs.300, and an AMD 5450 GPU for Rs. 1900, hooked everything up, and connected it to my AVR. I used the HDMi out of the card to stream both audio and video.
I'd laid all the components out behind the TV, resting the motherboard on the anti-static bag it had come in, and with everything else lying beside it with wires and HDD's making an ugly mess in the living room.
But, I'm living alone at the moment, so like any guy without anyone to nag him, once I got my content online, I forgot about everything else, and just enjoyed listening to music, and watching a few movies.

Trouble!
I'd planned to make the case myself with some wood that I had lying around, but decided not to, as it would have turned out quite ugly. I do most of my home repairs myself, and even make bits of furniture. But what I can't do is make anything look nice.
Anyway, I was too lazy to get started, and everything lay out in the open for a couple of months, and I no longer noticed the mess.

But, then, one fine day my 1 year old nephew came over, and decided to gave disassembling a PC a go. Luckily the power was off, but I got a telling off from his parents, and decided that it was time to actually buy a case to house the components.

Now, finding a small case for a full ATX motherboard isn't easy. Apparently no one likes big mobos anymore. Mini-ITX is the way to go. That's fine. Mini-ITX cases and boards are super. And Intel's NUC rocks. The next time I'm buying a computer, I'll be sure to buy one that I can't add more local storage to, and one that'll be a pain to upgrade.

At the moment though I wanted a full ATX case that looked reasonably nice, that I could lay on it's side, and which didn't cost more than all the parts inside it.
I came across a lot of lovely HTPC cases from Silverstone and Lian-Li, but they cost more than my computer.
Eventually, Google helped me, and I found the Cooler Master Elite 361. A mini-tower case which could accommodate a full ATX motherboard, 5 3.5" HDD's and a DVD drive. It cost about Rs.2000, but it wasn't available at any of the major online retailers. Smaller vendors stocked it online, but I wasn't sure I could trust them. However, members of this forum told me that they'd had good experiences with the vendors who stocked the case, and based on their feedback I ordered the case from theITdepot.com for ~Rs.2150 plus ~Rs.400 shipping (by road).

The case reached me in 6 days, which was a couple of days earlier than I'd been led to expect. That was the first nice surprise.

The second was the care the vendor had taken to pack the case. He'd opened the coolermaster packaging, and re-packed it, putting extra layers of cardboard in the front and back to protect it from accidental drops. Then he'd plastic and bubble-wrapped the coolermaster cardboard container, and he'd stuck it inside a bigger cardboard container.
He'd put so much duct-tape on it that it didn't even need any plastic wrap to keep it safe from the weather.

I haven't taken any pictures of the wrapped box, but I do have a few of the containers it came in. 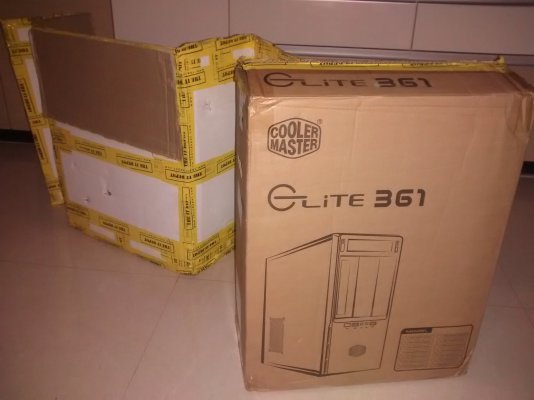 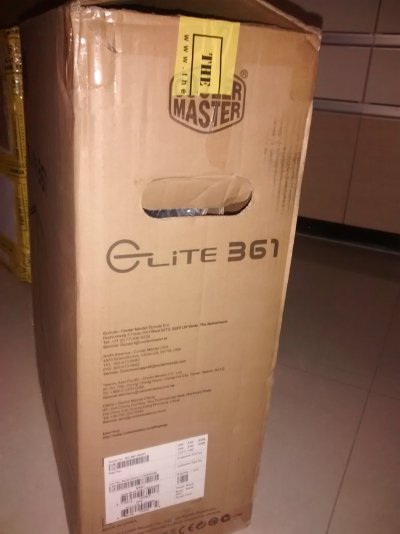 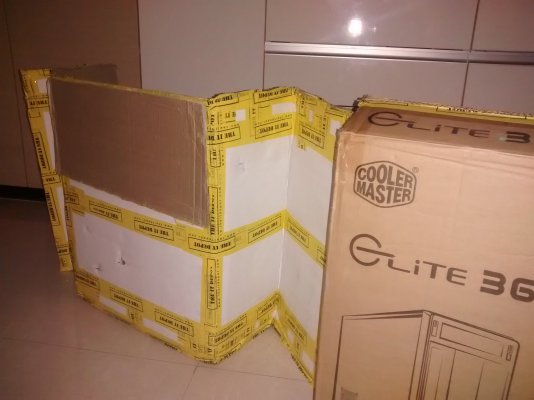 The case was unblemished on arrival.
It was small, but the metal was pretty thin, and it felt like it was a budget case. The exterior didn't look as nice as it did in the photos on the coolermaster website, but it wasn't ugly by any means.
The case came with a 12 cm fan on the roof, and had tool-less attachments for 3 HDD's. The fan seems to be a PWM fan, and it plugs directly into the motherboard, though a connector for attaching it to the PSU is provided.

The PSU goes in the front of the cabinet, which seems like a pretty nifty space saving arrangement to me.

Installation was a breeze, even though the tool-less attachment for the HDD's took more effort than it would have taken to put in a few screws.
The pop-outs for the add-on cards are punched into the case, and the screw-hole to secure the card is in thin metal that feels like it'll twist with a little extra pressure.

Anyway, those minor gripes aside, I was pleasantly surprised to find that the case had a front panel HD audio connector. but sadly no USB3.

Also, the only place I could find to store the extra wires coming out of the psu was in the space meant for the optical drive. Which means that one has to choose between a DVD drive, or a cluttered cabinet if one buys this case.
I don't have an optical drive, and my motherboard doesn't have USB3, so those two things don't bother me.

Ventilation seems to be more than adequate, and even though there are no rubber gourmets to reduce vibration and noise, the case is quite silent. The only noise seems to come from the PSU and CPU fans. Which were noisy to begin with. 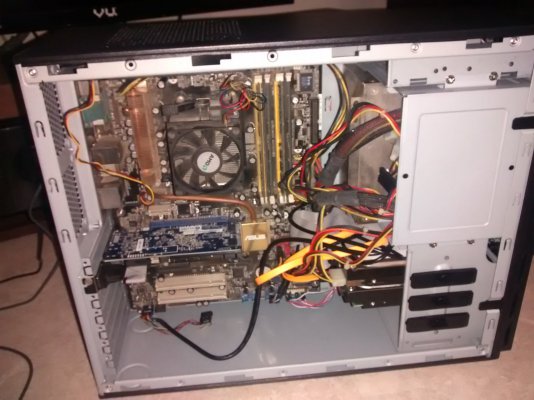 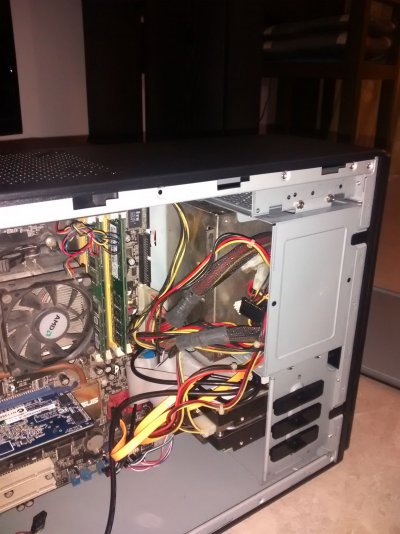 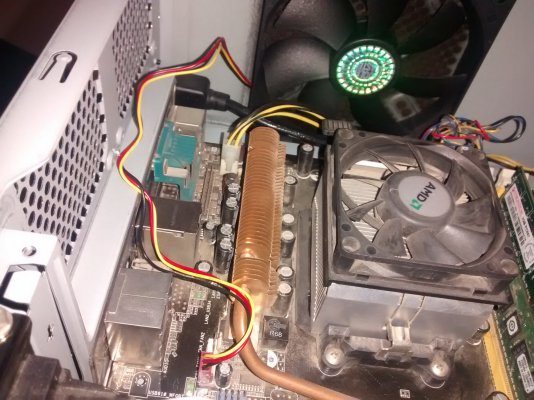 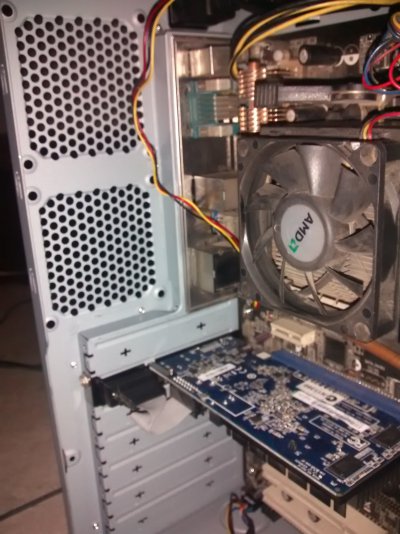 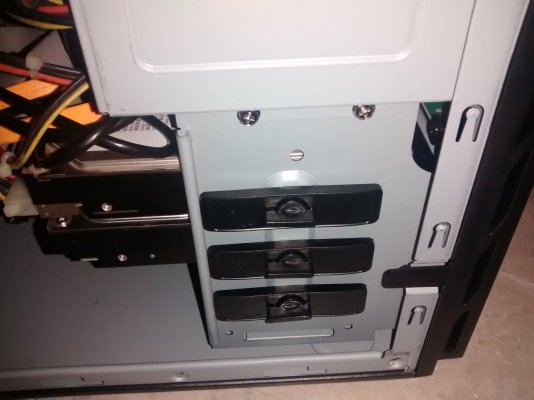 The case can either stand upright, or lay on it's side. It comes with foam pads pre-applied to the bottom, and with 4 spare pads along with some screws and zip ties. It's even got 4 long 1.5" screws, which I would imagine are there so that you can put a 2.5" drive in the space provided for the 3.5" ones.

Once the case is assembled and the side panels put on, it's pretty sturdy. The outer panels are made of thicker and better material than the innards.

I've placed the case under my TV, whose base, by a happy coincidence happens to be the same width as the case. Everything looks neater, is much quieter, and relatively baby proof. 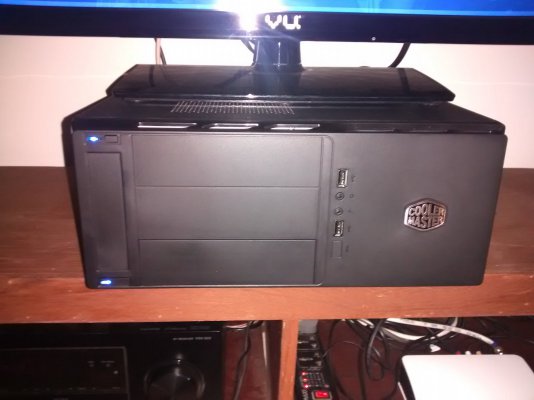 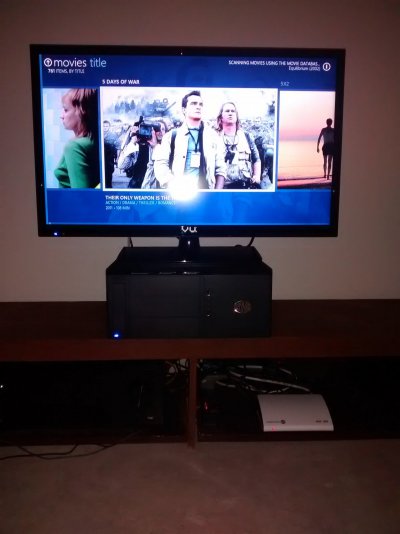 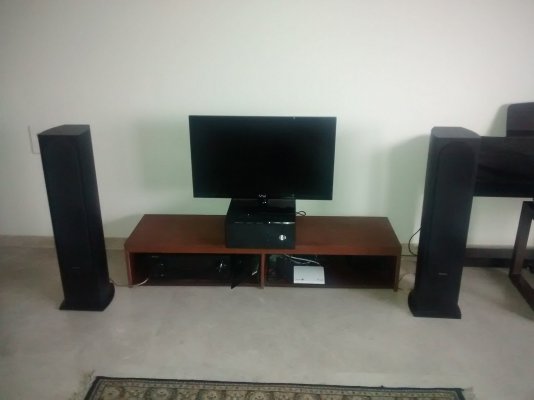 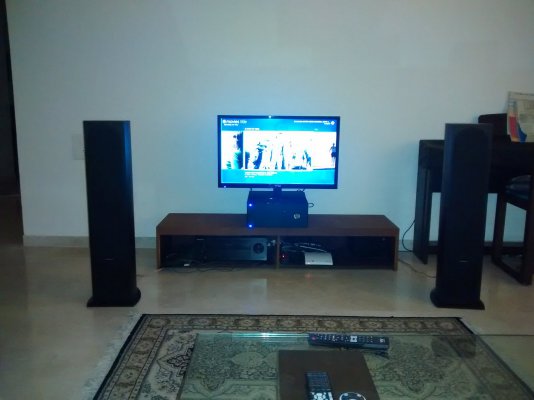 Veteran
Good one. Lets have feedback after 3 months on the upside down dust concept. Semi-Logical, so want to know the outcome of the experiment.

Veteran
Ah completely forgot about having read your thread. Thanks for linking me back here. Whats the news on the upside down dust buster?

Veteran
It's been very humid recently, and there's been practically no dust at home. So while the computer looks clean, I can't really say if that's because the environment is dust free, or the arrangement worked.
However, there's been no down-side to the arrangement either. The cooler hasn't fallen off, and the motherboard doesn't seem have been stressed either.

Adept
thats a big plus. Maybe you can write to cooler master on the observation. Shame that the cabinet is no longer available.

jith77 said:
thats a big plus. Maybe you can write to cooler master on the observation. Shame that the cabinet is no longer available.
Click to expand...

Its available. I got my 3rd one a few weeks back.
J

Adept
Where is this available?

Call and ask them to order for you. You may need to pay in advance. Or any other dealer who can talk to the importers.
J