Disciple
anyone booked it ? im really tempted. some girls in my office were saying they gonna book in lunch today. forgot to ask them later if they managed it
P 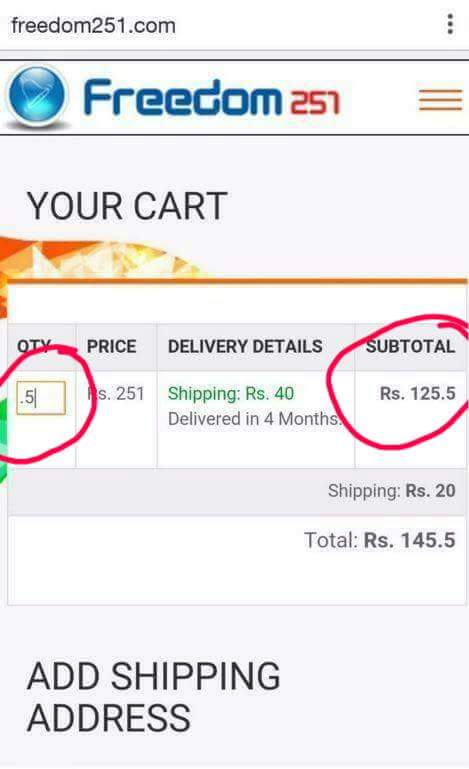 This is the biggest proof that its a scam

USE YOUR MIND too good to be true? IT IS
4k smartphone for 251
P

PHOENiX117 said:
This is the biggest proof that its a scam

USE YOUR MIND too good to be true? IT IS
4k smartphone for 251
Click to expand...

Nope this means that their website not tested properly

Skilled
Anyone managed to order

The Freedom 251 is the world's cheapest smartphone. It was launched in India by a Noida-based company called Ringing Bells for just Rs.251.
Click to expand...

Quotes from Pranav Dixit, HT (tech) editor on /r/india who was one of the first users of the phone.

What's the catch? Nothing (as far as we can tell).
The device raised more questions than answers: the company says the government isn't subsidising the
device; there's a Adcom logo on the front of the device, which was concealed with whitener; and the phone, which is being pitched as a
Made in India device for the Prime Minister Digital India plan, blatantly rips off the user interface of Apple's iOS.
I've been using the phone for about a day and so far, everything works as it should on a low-end Android device running Android 5.1 Lollipop. There are absolutely no extra apps on here, including the promised government apps like Swacch Bharat, but that may just be because these were just some early units given to the media.
Click to expand...

according to a Gadgets 360 report, the phone is not certified by the Bureau of Indian Standards (BIS) (this is mandatory — and time consuming and expensive), so it might possibly fail some radiation tests? We don't
know.
Click to expand...

All the app icons on
the built-in apps look exactly like iOS app icons. Mail is the same. Music is the same. Settings is the same. Heck, the
browser has a Safari icon on it. It's a clear violation of Apple's copyright. When we asked Ringing Bells about this at the event yesterday, their technical head Vikas Sharma told us:
“We have used Apple's icons because Apple hasn't copyrighted their designs." We have reached out to Apple for a
comment. It will be interesting to see if the company goes after Ringing Bells.
Click to expand...

A small background of the people/family behind it:

There's a Goel family behind this, but very little is known about them. As far as I know, they were into agricultural commodities for over 30 years are new to the telecom game. Mohit Goel, who was there at the event, and is an Amity University alumnus, didn't say much at the launch, and was mostly being directed
by his wife Dhaarna, who, according a Hindustan Times report, is the CEO of Ringing Bells. Goel’s parents who were present at the event said he had been assisting his father at his grocery store in Uttar Pradesh’s Shamli district till recently. Information about funding and finances is very sketchy/non-existent and deserves to be looked into, imo
Click to expand...

But the phone seems to have run into troubles already. Many have claimed that the Freedom 251 is just a sloppy rebranding of Adcom Ikon 4 which costs a little over 4000rs. But there is a difference in the number of camera megapixels. The Adcom Ikon 4 comes with 5MP rear camera and 1.3MP front while the Freedom 251 has a rear camera of 3.2MP, whereas, the front camera is 0.2MP.


You can also buy the phone in half. http://i.imgur.com/iOghxy4.jpg

Concluding it with yet another quote.

A /r user asked: How is the performance of the device,
is it even worth the 251 rupees.
Reply: Even if it just tells the time, it's still a cheap clock.
Click to expand...

Skilled
@iPwnz i made a thread b4 you

hmm...i didn't see it on this section so. Ignore if already seen. New discussion welcomed. Whatever way any of you see it.
S

Adept
Its a Fraud.

Skilled
Site is gone now....
This is the Indian version of Xodium.
https://www.techenclave.com/communi...lus-one-killer-or-international-fraud.170824/
C

iPwnz said:
hmm...i didn't see it on this section so. Ignore if already seen. New discussion welcomed. Whatever way any of you see it.
Click to expand...

Skilled
A friend of mine at work was able to book one at about 1:30pm in the afternoon today. The total price came to Rs.291/- (including Rs.40/- as delivery charges).

Payment details are apparently to be sent to his email within the next 48 hours as per the site.

Black_Hawk said:
A friend of mine at work was able to book one at about 1:30pm in the afternoon today. The total price came to Rs.291/- (including Rs.40/- as delivery charges).

Payment details are apparently to be sent to his email within the next 48 hours as per the site.
Click to expand...

I got one too... still no email though ... lets hope they have cod

rads said:
I got one too... still no email though ... lets hope they have cod
Click to expand...

I tried now and booked one as well! The 'Order Placed' page took repeated refreshing to appear but at the end it did. If CoD is not there... I'm out, LoL!

Adept
My colleague booked 6 - one for each family member.

I too couldn't resist. Booked one.

Skilled
I don't see why people are bothering to support this scam? Is is out of same old silly sentiments like nationalism and patriotism or it is just greed and false hopes of getting something dirt cheap?

This guy say that he plans to sell 50 Lac units. Assuming that he does get that many orders

At the rate each unit is expected to cost, this guy would have to incur a loss of over 1000 crore to sell 50 lac units. Do people really think that this guy or his investors are going to incur that kind of loss?

Skilled
So this phone was launched in a "Make in India" event. Embarrassing.
Didn't any government official confirm/verify the company/product before simply promoting it in the programme? To the people behind the phone please be trolls please be trolls. Its not only about the price but the product itself. Questions should've been raised by the govt. side. Was it an original or rebranded? Was it really made in India or assembled even? Why was the Adcom branding on the phone whitened out?
Keep in mind that the whole event was widely telecasted. I bet all the major tech sites in the world are covering the launch and digging for more infos. I mean the product was not even in a "Beta" phase for ****'s sake. It was a ****ing rebranded phone. Humiliation not only for the government but also the people.
This whole "Make in India" is turning out to be joke. Right from the logo. Sham. Carelessly done is what i will say. Too gullible.


Criminal said:
relax... you were the third person to open a thread on 251, so i had to mention it.
Click to expand...