Disciple
Wow, nothing on this game ? No1 is interested or has played or bought or anything of that sort ?
I

Adept
I have played soo many games buy never tried any MMORPG.Is it similar to skyrim?It costs about 3000 rs.is it worth that much money?

Skilled
This doesn't have a monthly subscription, and what I hear from the interwebs, it's quite good.
C

Disciple
Exactly, this is "supposed" to be a different MMORPG. No subscription fees make the acquisition cost a one time cost (and yes 3k is expensive, I have never spent any money on my games) ... but this time, I think this is a worthy option to try... was wondering if any gamers in India had opinions on this one...

Skilled
I am a Hardcore player for EQII and Casual in WoW. So far what I have heard from my guildies is that GW2 looks good so far and have some new MMO elements. Looking forward to get my hands on it soon.
C

Disciple
So anyone got it yet guys ? I bought this last Monday, took 2 days to download.. skipped office on Wednesday to play the game the whole day... very nicely done and all... ofcourse, my views are pretty basic since this is the 1st kind I am playing any MMO, so the whole why this game is different from any other MMO (WoW, etc.) is beyond me.

Playing with an elementalist for now, the whole weapon based skill system is definitely unique (I have played a LOT of RPGs, just not MMORPGs) and each race is markedly different in how it plays, and not just that every race has 10 completely different skills, but a lot more...

However, and this maybe just my arrogance / ignorance of such things; I do end up wondering what to do in the game. I am barely level 12 (so yes, not enuff time spent in the game), and due to the weapon based skill system, I have already unlocked most of my skills (90% I am sure, if not 100%), so there is no drive to level up higher to unlock cool skills anymore. Loot drops are not as common (again, benchmark being RPGs like Diablo / Torchlight or even Borderlands!!!) so the excitement to kill more and higher difficulty is not there. Basically, the character doesnt seem to be getting buffed up as it levels. Fights do not get bigger, spells do not get stronger or more spectacular, enemy is not tougher by much. Its just static with probably numbers improving in the background. Yes my health has doubled from 600 to 1100 over last 5 levels, but so has that of the enemies, and so is their damage to me and mine to them... so just bigger numbers in the background with no change.

What I am saying is, the grinding is probably much better than other MMOs but still seems like grind.

All the above is for PvE playing alone, which is not how this game was probably meant to be played.

Bottomline - Need a guild or multiplayer experience to move to the next level of experience... any1 buying ?
K

Skilled
I pre-ordered this Got into a four beta phases coz of that.

Love the game. The visuals are awesome. Lotta stuff to do. Best no subscription and the content is more than enough for the price tag.

Moreover pvp for lvl1 . Since i am on travel (without my uberpowerful sytem), this and LoL are my pastimes.

About the grind worries, what ever u do gives you experience. So just go craft some stuff for a while. The experience you get from that is good too. Or you can try the jumping puzzles to achieve vistas which go towards map completion (+exp).
C

Disciple
No no, am not worried about levelling up, what I meant to say was that the power didnt seem to get spectacular as one gains more levels since all weapon skills can be unlocked initially itself...

Never mind actually, its a moot point... where are the Indian players though?
K

Skilled
Spread out on different servers maybe ... i am not sure ... i took it as a passtime ... not joined any guild yet.
B

Adept
Have always played F2P mmos. Cant imagine spending 3k on this. Might see if i can get any pservers before considering to buy @krugur whats ur user id on LoL. i play that regularly now.
Last edited by a moderator: Jun 9, 2014
K

Disciple
#benryu , you dont wanna spend 3k (actually closer to 3.5k) on this ? Why not ? This is also F2P, just initial payment... unless you have always played the free ones like Immortals and stuff. This is my first MMO purchase too
K

Skilled
Reached level 29 now. The depth in this game is mesmerizing. There is so much to do u never get bored. I got a few times stonewalled thinking how am i gonna finish all this . The maps are huge too. I will put up a few screenies of me once i am back home . But the game is very beautiful and they have made a lot of "Vista" points which emphasize this. Its like dark souls .... what ever level you are u will die a lot inspite. Thanks to the scaling of you level based on the location you are in. Even if you are level 30 if you aggro a few level 19 mobs be sure u will die unless u have the skill to dodge them and kill em all fast. I thought i can add more info here ... but there is so much to tell ... reviews cover most of it i guess

Disciple
Pre purchased on April 10th when dollar was cheaper , got it around 3.1k then.
I play on Eu region server "underworld". Got a lvl 80 engineer already and going to make all 8 classes to lvl 80.
C

Disciple
#_Atif_ , did you buy additional slots too ?
K

_Atif_ said:
Pre purchased on April 10th when dollar was cheaper , got it around 3.1k then.
I play on Eu region server "underworld". Got a lvl 80 engineer already and going to make all 8 classes to lvl 80.
Click to expand...

krugur said:
:hail:I dont think i will reach lvl 80 with one character this year
Click to expand...

Its easy to lvl if you do crafting or participate in dynamic events. I got like 30+ lvls from crafting only. note that when u use discovery to find new items u get more exp , just crafting same thing wont give you more exp or crafting lvl. I have like 300+ jeweler and 200+ tailor.

I got to lvl 80 in 100 hrs even though i was not trying to lvl. You can use "/age" in chat to see how many hrs u played total and per char

Also WvW is good for exp if you are raiding or defending successfully. If you are dying a lot in WvW then you need to group with more people. For attacking dont go if your group has less than 30 people/without siege weapons/no supply to build siege weapons. The enemy team will have backup coming from behind you. When defending stay in the keeps rather than small towers as towers are harder to defend without backup. Also keeps have two walls - outer and inner wall. Use cannons, arrow carts to wipe out ur enemy easily. Dont ever go near the wall and try to hit the enemy, even pouring burning oil is hard when there are too many enemies.

cybermantas said:
#_Atif_ , did you buy additional slots too ?
Click to expand...

yes i got 3 extra character slots , full inventory slots , n some bank slots with the gems i traded in game. You get more money as you level but the teleport fee and repair fee also increases.
T

Skilled
#_Atif_ ty man ... i am just getting the hang of WvW. Its hard to reach back to the fight if u die the map is so large. I have not been crafting much. I collect stuff but didnt get into active crafting. I will try that too. Just some lvl 30 weaponsmith now. 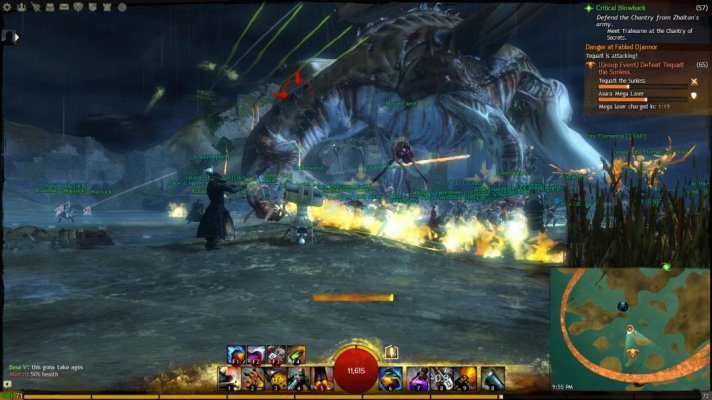 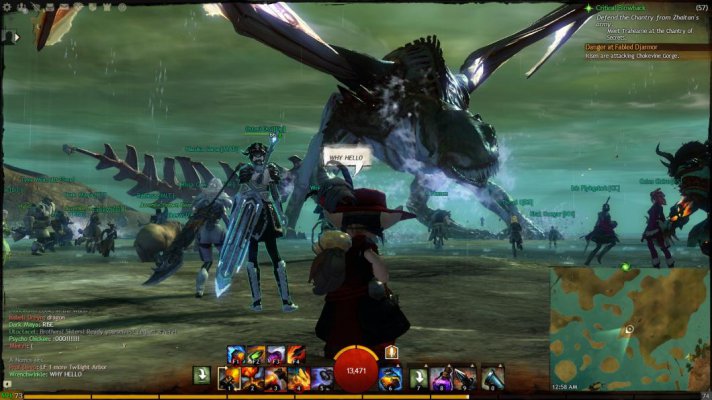 Above Dragon respawns 3 hrs from last kill time. But you get to open the chest reward only once per day. Reward will be according to your current level. 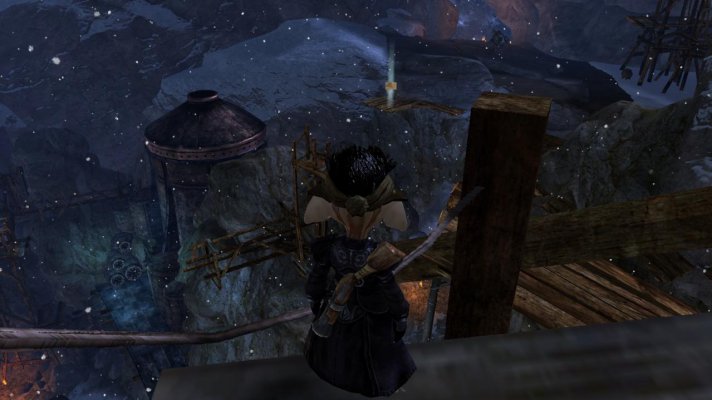