Idea and Search for a 3D printer

After assembling Otto DIY robot I felt strong need of having a 3D printer handy. Though I have always wished to have some machine to create customised pieces.
After spending lots of time on reprap portal, I created list of parts / cost but was stuck at frame/roller portion. I called few dealers who sell complete kits but they were quoting too high price.
I once had a thought about production quality of self assembled printer. I was convinced that a self assembled piece is going to trouble me a lot while I wanted to focus of micro-controllers and electronics so I decided to look for better alternatives with a budget pegged at 20k.

In my search, I hit this Creality Ender-3 which was launched in March'18. It has amazingly positive reviews and all comparisons with every other printer in $200-segment left me struck, awestruck. No one is ahead of it. I found Ender-3 has been receiving appreciations from all directions.


Purchase, Shipping and the Customs

I found the printer selling for $199 at banggood with free shipping through India direct mail.
A few days later I again checked it and found it was available for $189. I had a $10 discount coupon. These $20 were going to lighten my Customs duty bill.
Ordered it on 26 June. On 11 Jul I was told that my order was returned by Gati as it could not pass through Indian Customs. They offered me to reship it by registered mail or to refund. I told them to reship through registered mail.

The parcel reached Delhi FPO on 25 Jul. On 1 Aug, the custom inspector detained it with reason 'Invoice missing'. I was expecting some kind of communication from FPO or customs deptt, but nothing happened for next two days. I contacted the customs office (ph: 011-25655128). The operator on the other side told me to send the invoice copy and a cover letter in word file to speedpost12345@gmail.com. It was done the next day 4 Aug, Saturday. On 6 Aug the parcel was released. On 7th, my postman called and request to pick the box from post office as he won't be able to carry it on his bicycle. He showed a small customs bill of Rs.5580, took money and handed over the box. The copy of same customs bill was also pasted on the box.

When asked to send the invoice copy, I sent them invoice copy downloaded from banggood.com, screenshot of order detail, screenshot of parcel tracking detail from Indian Post website and a cover letter.
It was released on next working day. The box was taped with branding of Indian Post. I can guess, the parcel was opened and inspected .

They charged me 40% of the actual price of printer ($199) and an extra Rs.100.
Anyway, I was ready for this. I send them actual bills without making any attempt for saving on customs. Its a totally useless idea when compared with hassles of getting summoned to their office and facing their questions. Better let the joy remain in continuity.

You need to keep a few things ready before you start the assembly:
A PLA Printer roll (not just a piece of filament).
Glue stick.
Vernier scale.
Tempered glass 22x22mm, (I am yet to purchase one. I guess iPad pro 12.9 tempered glass will fit)

Assembly
You can find many many video on youtube, I used official creality assembly video.
They are providing all the tools required for assembly, few spare screws, spare 0.4mm nozzle, a spare PTFE inlet connector, 8GB uSD with sample print and a copy of cura, and about 10m PLA filament.
It took me about 3 hours to complete the assembly. Bed leveling took another half an hour.

Solid, quality manufacturing. You will feel great after the assembly. I felt Creality is continuously making changes in production as some of the cons pointed out by early-reviewers were not there. eg: 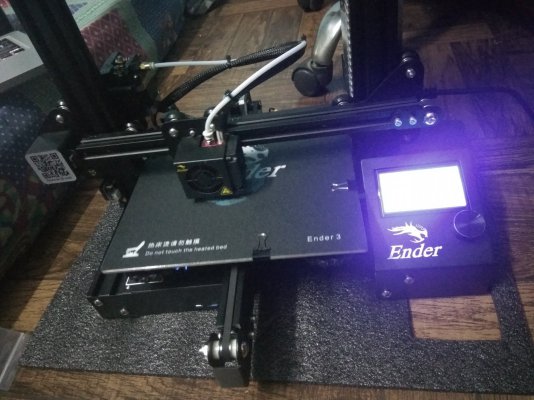 Cura should be configured for Ender-3 first: funrobotix.com/instructions/3dprint/cura-settings-ender3.html

Filament entry point is the only weak point in this printer.

Finally Creality has made this printer completely open source : github.com/Creality3DPrinting/Ender-3
Both hardware and software are available.

I would like to receive your ideas about this printer and 3D printing.
Last edited: Aug 25, 2018
Click to expand...
N
Written by

Veteran
Quick update I now have 6 of these and have started a 3d printing business,
Have ordered a laser next

kippu said:
Quick update I now have 6 of these and have started a 3d printing business,
Have ordered a laser next
Click to expand...

Intriguing. Who are your target customers and how do you guys find each other?
K

Being husband to a baker helped

On a Journey called Life :P

Veteran
what all can we print and how strong can that material be ? Like can we print monitor armset amd stuff ? also how do we posible the end product ?

Being husband to a baker helped
Click to expand...