Borderlands 2â€²s next DLC release has been confirmed as Mr. Torgueâ€™s Campaign of Carnage.

Torgue is one of the weapons manufacturers in the game, and the expansion was hinted at last month when a list of PS3 trophies were outed on NeoGAF.
A release date and price are yet to be announced.
Click to expand... 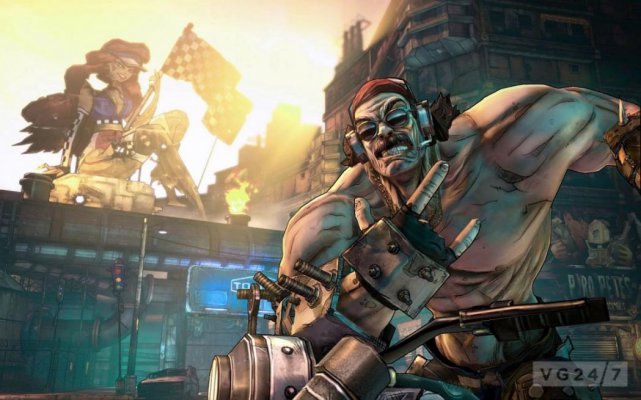 Skilled
@Black_Hawk: News was already posted on the previous page.
Last edited by a moderator: Jun 9, 2014

Gearbox recently announced that the second campaign DLC for Borderlands 2, â€œMr. Torgueâ€™s Campaign of Carnageâ€, would be available on Steam November 20, 2012, according to IGN.com. New details have emerged November 16, 2012, that describe what the second DLC is all about and it appears as if it should be a wild ride with plenty of action.

â€œThe basic story of Campaign of Carnage revolves around a new vault discovered in Pandora, buried in the center of a large crater that will only open â€œonce the champion of Pandora feeds it the blood of the ultimate coward.â€ Your introduction to Mr. Torgueâ€™s Campaign of Carnage comes via Mr. Torgue himself, screaming at you like a terrifying mix of Hulk Hogan and Macho Man Randy Savage with a deep love for explosions.â€

The good news is that while it will have an arena style combat element, it does not appear that this is a Mad Moxxi clone. There will be side missions and plenty of quests.

Most have had plenty of time by now to take down Handsome Jack, defeat The Warrior and the run through the first DLC, but for those that are yet to reach level 50, the DLC should auto-scale to your level. "Mr. Torgue's Campaign of Carnage" is an opportunity to level up and get some great new weapons if going through the primary campaign a second time just to reach level 50 is not your thing.

According to the article, the DLC will not raise the level cap but Gearboxâ€™s Steve Gibson had some interesting comment on that topic. â€œWe think people are going to be really happy when we do get to it. Itâ€™s a little bit different way of doing it. Yes, the number will go up, but there are some other things associated with it that weâ€™re trying to do an even better job of.â€

Check out the gameplay video with commentary that Gearbox put up with IGN, there is a lot of great detail and is the first good look at what to expect. All DLC campaigns are available at the Steam store as a part of the Borderlands 2 Season Pass, or can be bought individually for $9.99.
Click to expand...

Disciple
@Ethan_Hunt, DLCs are piling up and demanding us to complete our first co-op play-through..
Last edited by a moderator: Jun 9, 2014

Skilled
Hey, I'm ready when you guys are. I thought you guys were out during the festive season. When do we resume?

Disciple
@tarey_g will be back from vacation on 19th. After that we can resume
Last edited by a moderator: Jun 9, 2014

Adept
I am back. Lets plan and finish this fight !!!!

Skilled
Yay Done with the first play-through. Level 34 Axton atm. Have to say the game is pretty awesome. The story has improved a lot, but still leaves wanting a bit more. Build up was good but the ending was a bit bland. Also the end game boss was a bit of a let down for me.
Was wearing a fire immunity sheild. Boss did little to no dmg.
.
Neways started the second playthrough, let see how it goes.

A new batch of screenshots has been revealed on Jan. 14 in regards to the recently-released multiplatform title, â€œBorderlands 2.â€ As reported by MP1st, the latest set of images takes a look at the heads and skins that will be added to the PC, Playstation 3 and Xbox 360 video game in the upcoming Gardenia DLC. Players will get new customization options for the Assassin, Commando, Gunzerker, Mechromancer and Siren classes. You can check out the Gardenia downloadable content pack screens in the slideshow at the top of this article.

The â€œBorderlands 2â€ Gardenia DLC will be released on the PC, Playstation 3 (through the Playstation Store) and Xbox 360 (via the Xbox Live Arcade) on Jan. 22.
Click to expand...

WOW! They look absolutely fantastic. @sameer.sharma @tarey_g when are we resuming? Did Vamsi get his HDD replaced? There are tons of DLC content out.
Last edited by a moderator: Jun 9, 2014

Skilled
I have played the game for around 3 hours i guess . The game didn't live up to my expectation . The Iron sights on all the guns are ........ wide i guess . I sticked to the sniper rifles because of the awful recoil of all the short to mid range weapons . Enemies still pop up even when i have cleared the area . I died a lot of times which was frustrating because i rarely die in any other games single player/story mode .

challapradyumna said:
I died a lot of times which was frustrating because i rarely die in any other games single player/story mode .
Click to expand...

Good thing you started on a shooter and not a Mil-sim like Operation Flashpoint: Dragon Rising OR ARMA II.

The game is meant to be a co-operative slug fest not an I'm a one man showboat. =|

Skilled
I have seen those CO-OP videos and downloaded the game .

challapradyumna said:
I have seen those CO-OP videos and downloaded the game .
Click to expand...

Seems it is an issue, have you played the first game?

Skilled
No. Is there a specific way to play this game ??. Does the guns get better or all the guns have the same amount of recoil ?

challapradyumna said:
No. Is there a specific way to play this game ??. Does the guns get better or all the guns have the same amount of recoil ?
Click to expand...

I have not played 2 because Borderlands is not my type of game, realized while playing the first title.

No the guns are procedurally generated en-masse so they are a frankenstien mix of various attributes but I doubt the default recoil can go down. Try to adjust settings to see what you can get.