Adept
I simply do not understand, how even educated people are pointing gun to AAP when they have been in power only for a couple of weeks, whereas BJP/Congress did not do anything for them for the last 10/15/20 Years.[DOUBLEPOST=1389111792][/DOUBLEPOST]

You want to see what Congress/BJP idiots have said/done in the last half a century????

Veteran
I don't care what anyone says or does as long as they don't put us into more shit.

They actually never said that; only asked for a referendum of the people residing there. The army isn't just placed at the borders in Kashmir, but all over the place. Civilians live with military presence throughout their lives; it's not a healthy living environment. There has to be a balance between fighting external and internal threats, and enabling a better life for the civilians.

Veteran
Dumb ass movements like this.. Not required. We live in a hostile territory. 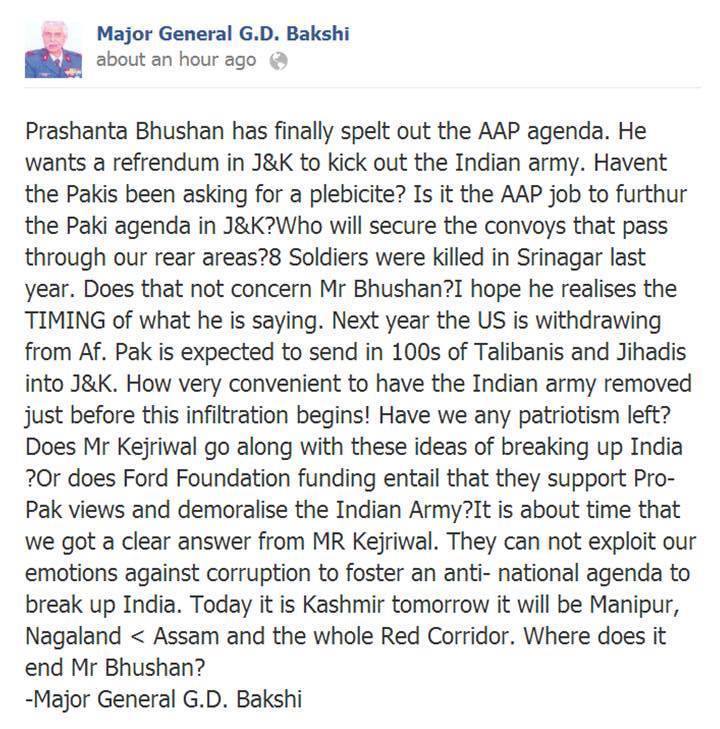 I was expecting lot of Hot Air from AAP. Not this.

Veteran
Haha Come on guys, everyone has a few stupid ideas. Yesterday Modi was agreeing with Ramdev's idea of transaction tax and cashless economy, sending us back to the stoneage. There are people like these everywhere. I dont think Prashant Bhushan saying anything matters. There are people, leaders in india who have been saying the same for ages.
S

Veteran
It is very strange to read some of the comments here. Either people are grossly misinformed, or they have a very personal bias against AAP.

AAP did not state that they did not need the Army in Kashmir. Prashant Bhushan said that. AAP immediately distanced itself from that comment and said that they have not released their statement till now. Everyone is entitled to their opinion. I am waiting for them to publicly announce their national policy before I judge them harshly. Also, before you tell me that Prashant Bhushan is a senior leader and holds the views of the party, then do a google search for Digvijay Singh.

As far as the future of Congress-AAP alliance, here is what I hope happens: AAP is playing smart right now by not targeting tainted Congress/BJP ministers till they secure a place for themselves in Indian politics. Once they have done that, post the Lok Sabha elections this year, they will (should) target the corrupt ministers.

Veteran
^^I don't think they will wait so long. They are already prepping up to go after Sheila Dixit's government. In fact, Congress withdrawing support after AAP sticks to its promise of anti-corruption will be beneficial to AAP in both Delhi re-elections and LS elections.
S

blkrb0t said:
^^I don't think they will wait so long. They are already prepping up to go after Sheila Dixit's government. In fact, Congress withdrawing support after AAP sticks to its promise of anti-corruption will be beneficial to AAP in both Delhi re-elections and LS elections.
Click to expand...

I would like that very much. A precedent needs to be set for the future.

Veteran
No. Its shows the caliber and mettle of the people AAP consists of. How juvenile, inexperienced, short sighted the members and their policies can be. It doesn't matter AAP distance or make no comments.

After all you want AAP to lead you r8?

One of the AAP guys had also said that Kashmir should be separated from India.

ex-Mod
Prashant Bhushan is equivalent of Digvijay Singh in one quality.
Both talk nonsense and embarrass their party.

Veteran
AAP office got attacked. Guess the Political goons are now down to their last bet, dirty tactics.
S

Party Monger said:
AAP office got attacked. Guess the Political goons are now down to their last bet, dirty tactics.
Click to expand...

http://timesofindia.indiatimes.com/...ttacked-in-Ghaziabad/articleshow/28545686.cms
GHAZIABAD: Activists of a right-wing group on Wednesday attacked and vandalized the Aam Aadmi Party headquarters in Kaushambi with bricks and stones to protest against party leader Prashant Bhushan's remarks on referendum in Kashmir.

Around 40 activists of Hindu Raksha Dal broke flower pots kept outside the AAP's office and tore party posters. Some glass doors were also smashed in the attack.

"We today staged a protest against AAP's stand on Kashmir. AAP leader Prashant Bhushan's remark on Kashmir are very sad for Hindus due to which we staged a protest outside the party office," said Pinky Choudhary, national convenor, Hindu Raksha Dal.

Comments are fun to read.

If I had a penny every time someone's religious sentiments were hurt in this country...

Adept
Stupid people!!! why do they behave that way.
I think last time he made that comment he was slapped.

A
While we were not looking, India won some battles