'This is My Broadband Plan' Thread

yashvisent said:
Can you please mention your plan or plan code
Click to expand...

Yes, I know. This is a plan from 2010 and I'm crazy to be paying that much. But until 2 months ago, there was no FUP on my account and I was downloading >400 GB every month. The plan is an old dual speed (day/night) plan that was very popular on this forum back in 2009.

Airtel's smartbytes page always displayed 'Not valid for your DSL id'. But as of two months ago, a 25 GB cap appeared overnight, speed was reduced to 512 kbps on crossing 25 GB (which I cross within a day). I've been fighting with Airtel for the past two months and the issue is now with their appellate division. They are refusing to restore my unlimited downloads and I am stuck on 512 kbps. I have no option but to switch to some other limited plan.

From discussion with their appellate division, it appears that Airtel is clearing out legacy plans with no download limit. Airtel users on legacy plans with no FUP limit, beware. Airtel did this to me and they can do it to you anytime. Check your Smartbytes page every day and complain as soon as they switch you out.
S

Disciple
ISP,Area,City: Macone Broadband, Khopat, Thane (W)
Speed and FUP: 10mbps, Unlimited (I do get download speed of over 1 MBps). With Youtube and Torrent, speed is over 4MBps
Post Fair Usage Speeds: None
Amount inc Taxes: Rs. 6800 for a year
Performance: Excellent.

Adept
ISP : Tata Indicom/Docomo Fiber (Till nearest node, copper after that)
Area, City : Sector-43, Gurgaon
Speed and FUP : 16Mbps and 160GB (1 Mbps UL)
Post FUP : 512Kbps
Amount (incl. Taxes) : ~ 1950
Performance : was poor for 6 months when i got it, (Made tons of complaints last year, its improved after they shifted their servers from Hyderabad To Mumbai in the last few months. Almost no downtime now, semi-occasional speed drops to 4Mbps for a couple of hours once a week. Some sites do have issues opening sometimes). 8/10
Average for gaming & streaming. Youtube works exceptionally well surprisingly.

Thanks for your reply, But I guess this plan has a FUP of 45GB

I have been told the same thing. They have given me an ETA for 16Mb in next 3 months.

Performance: No downtime from In2cable side but once or twice a month, the local guys have some issue which is fixed shortly as he comes on his bike within 1-2 hours of complaining.
P

Performance: No downtime from In2cable side but once or twice a month, the local guys have some issue which is fixed shortly as he comes on his bike within 1-2 hours of complaining.
Click to expand...

Hi, I also have internet connection from a local reseller. Can you please guide me on how to retain the same speed on torrents even after FUP? 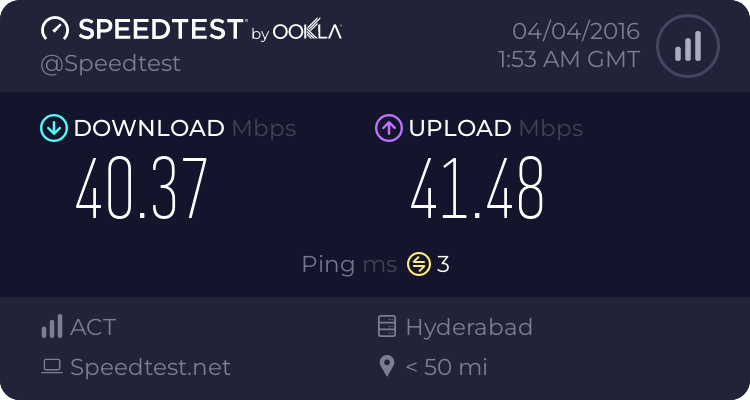 bking said:
Hi, I also have internet connection from a local reseller. Can you please guide me on how to retain the same speed on torrents even after FUP?
Click to expand...

Hey, this is from the ISP side, there is nothing you can do from your side to enable it.

What is your monthly usage? (Wired broadband)
2 3

H
Doubt about You broadband